Advertisement
The Newspaper for the Future of Miami
Connect with us:
Front Page » Transportation » City easement lets railroad go airborne 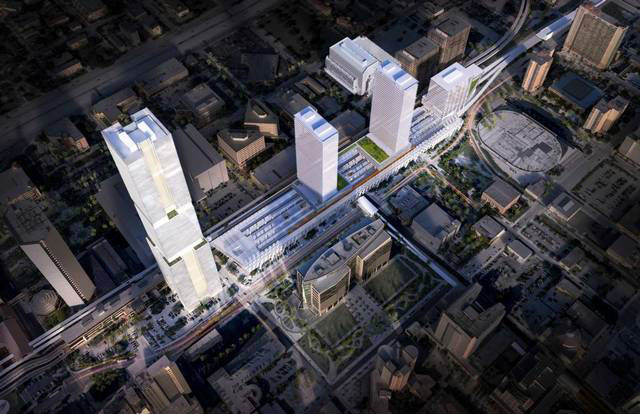 In order to build its MiamiCentral train station downtown with elevated tracks, All Aboard Florida needed an aerial easement over Miami streets. City commissioners last week granted the easement to a company affiliated with All Aboard Florida, DT Miami LLC.

The heart of the station will be a five-train track structure elevated 50 feet. All Aboard Florida said the station’s framework includes 75 train piers to hold up about 5,000 linear feet of track.

DT Miami plans to construct permanent All Aboard Florida elevated railroad platforms for trains and passenger waiting areas across the city right-of-ways and the Metrorail corridor, the resolution states.

The legislation cites the value of the rail link. “The All Aboard Florida passenger railroad system is of regional importance that serves the tri-county [Miami-Dade, Broward, Palm Beach County] area,” it reads.

The resolution says the aerial easement serves a public purpose “to expand and promote business and job creation in the community, as well as serving the transportation purpose of a new railroad and providing a connecting corridor.”

The new station is to be integrated with the Miami-Dade County Metrorail and Metromover systems, possibly link with Tri-Rail, and is being considered a major transit hub for the city with connections to buses, trolleys, taxis and more.

City Manager Daniel Alfonso pointedly alerted commissioners to the estimated value of the easement, which he said was about $1.4 million. If the city is ever asked to joint venture with All Aboard Florida, it could consider the $1.4 million value as matching funds, he said.

MiamiCentral is to start passenger service in early 2017 between Miami and West Palm Beach, with Orlando runs targeted to begin in late 2017.

The new rail station is part of a larger plan to transform vacant downtown property into a new mixed-use neighborhood with hotel, office, residential and commercial uses.

All Aboard Florida parcels extend north from about Northwest First to Eighth streets, generally east of Northwest First Court. The linear stretch was once home to the city’s main train depot.

Last week, site work began on 3 MiamiCentral, perhaps the smallest piece of All Aboard Florida’s full development vision for downtown. That mixed-use complex is bringing Class A office space, retail and a grocer to Historic Overtown.

The property is hugged by Northwest Sixth and Seventh streets and Northwest First Court and Second Avenue west of the Miami-Dade County Administration Building.

The plan promises dedicated parking for the historic Lyric Theater nearby. One of the first tenants will be All Aboard Florida, which will relocate its headquarters from Coral Gables.