Advertisement
The Newspaper for the Future of Miami
Connect with us:
Front Page » Communities » 1,771 Miami Worldcenter residences OK’d 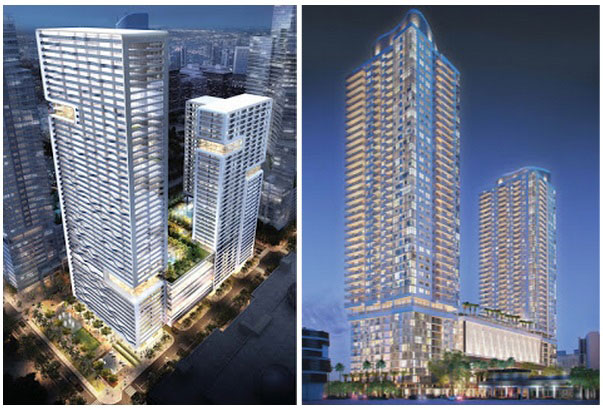 Two groups of architects, designers, attorneys and developers took a tag-team approach in presenting details for Worldcenter Block E, north of what will be the promenade, and Worldcenter Block G, bordered on the north by the promenade and on the south by FEC rail tracks. The sites are between North Miami Avenue and Northeast First Avenue.

A key to the Miami Worldcenter plan is closure of Seventh Street to create a landscaped pedestrian pathway leading to the old Miami Arena site, which will be developed into Miami World Expo Center, a $600 million hotel and convention center.

Miami Worldcenter is billed as a $2 billion project out to transform 27 acres of the urban core.

As designed by Arquitectonica, Worldcenter Block E will include two towers, 48 and 37 stories, joined by a parking podium topped with amenities. The project will include 899 residences, 344 hotel rooms and parking for 1,100 cars. It will also be home to 38,850 square feet of office space, 11,200 square feet for restaurants, and about 10,000 square feet of retail.

“Newgard is excited to be part of Miami Worldcenter as the project prepares to break ground this year,” said Newgard’s Barbara Salk.

“We’re bringing a mixed-use development with hotel, retail and multi-family uses to the heart of downtown just as Miami’s brand goes global,” she said. “Our project, which is consistent with the master-planned vision for Miami Worldcenter, will complement the project’s nearby hotel, expo center, residential and retail components as well as All Aboard Florida’s MiamiCentral project, which is now under construction.”

Two towers will anchor the ends, with the 43-story east tower being home to 450 residences and the 40-story west tower containing 422. The amenity deck is to have a dog run.

The towers are to be joined at the base by a garage with 1,047 spaces for residential and an additional 20 for commercial use.

The Urban Development Review Board recommended approval of both projects.

Miami World Expo Center, which includes a Marriott hotel, is being built by MDM Development Group. Groundbreaking is expected this fall.