Advertisement
The Newspaper for the Future of Miami
Connect with us:
Front Page » Real Estate » Vast Mediterranean Village moving ahead 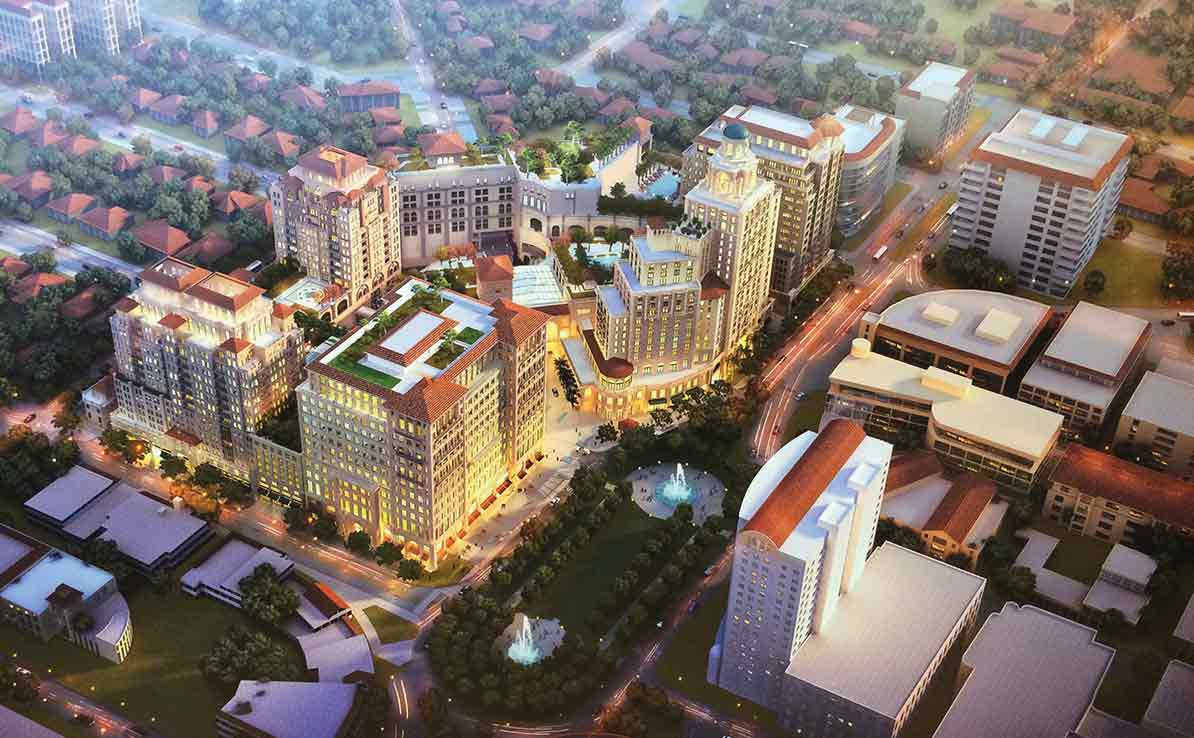 Mediterranean Village at Ponce Circle is proceeding on schedule, say its developers, who plan to submit construction drawings currently being prepared to the City of Coral Gables by year’s end.

At the same time, engineers are devising proposed construction techniques for excavating and sealing the two-story underground garage that will house all truck deliveries and pick-ups, along with underground parking, according to Eddie Avila of Key Realty Advisors Inc. Once the company receives approvals from the city, he said, Mediterranean Village developer Agave Ponce LLC expects to spend 36 months constructing all aspects of the project.

Agave Ponce is working with the Miami-Dade Water & Sewer Department regarding utility hook-ups. To date, five construction companies have bid and Agave expects to select a construction management firm in the coming weeks.

Agave Ponce is also in initial discussions with hotel companies to operate the 184-key luxury hotel.

In June, city commissioners approved the $500 million mixed-use project that will rise on the former Old Spanish Village site, 6.74 vacant acres a few blocks south of Miracle Mile and the central business district. The largest development ever in Coral Gables, Mediterranean Village is to include about 300,000 square feet of retail and restaurant space and about 300,000 square feet of offices along with the 184-room hotel and about 230 residential units.

In June, commissioners unanimously approved the project “in concept” but disagreed, 3-2, on allowing the 218-foot-tall main building to have a two-story, rooftop restaurant. Vince Lago and Jeannett Slesnick cast the opposing votes, saying they had concerns about a building higher than the 190.5 feet of habitable space the city currently allows.

Should the two-story restaurant not work out as planned, the developer agreed to return to the commission for acceptance of another use.

After several years in planning stages, Agave Ponce agreed to a number of changes, including reducing size and massing by eliminating 109,798 square feet; reconfiguring the hotel driveway so that it’s off of Malaga Avenue instead of Ponce de Leon Boulevard; adding plazas and open spaces; and lowering the scale of buildings near the Art Center Building, a central feature in the project, to give it more prominence.

By June, the development agreement was also refined to better define the public benefits and off-site improvements, including a $1.4 million contribution for police and fire services.

The developers are giving the city $27,829,000 in public benefits. All are above and beyond what the code presently requires: an additional $2.7 million for art in public places, along with the required 1% of construction costs ($5 million); $2 million each for neighborhood streetscape east and west of the project, Ponce de Leon (north); $125,000 for University Drive streetscape (south); $200,000 for Santander Avenue streetscape; $1.5 million for publicly accessible rooftops; $16,990,000 to enhance trolley service; $100,000 for a trolley stop; $100,000 for bicycle support facilities and parking; and $114,000 for electric vehicle charging stations.