Advertisement
The Newspaper for the Future of Miami
Connect with us:
Front Page » Communities » Tennis tournament seeks more stadiums 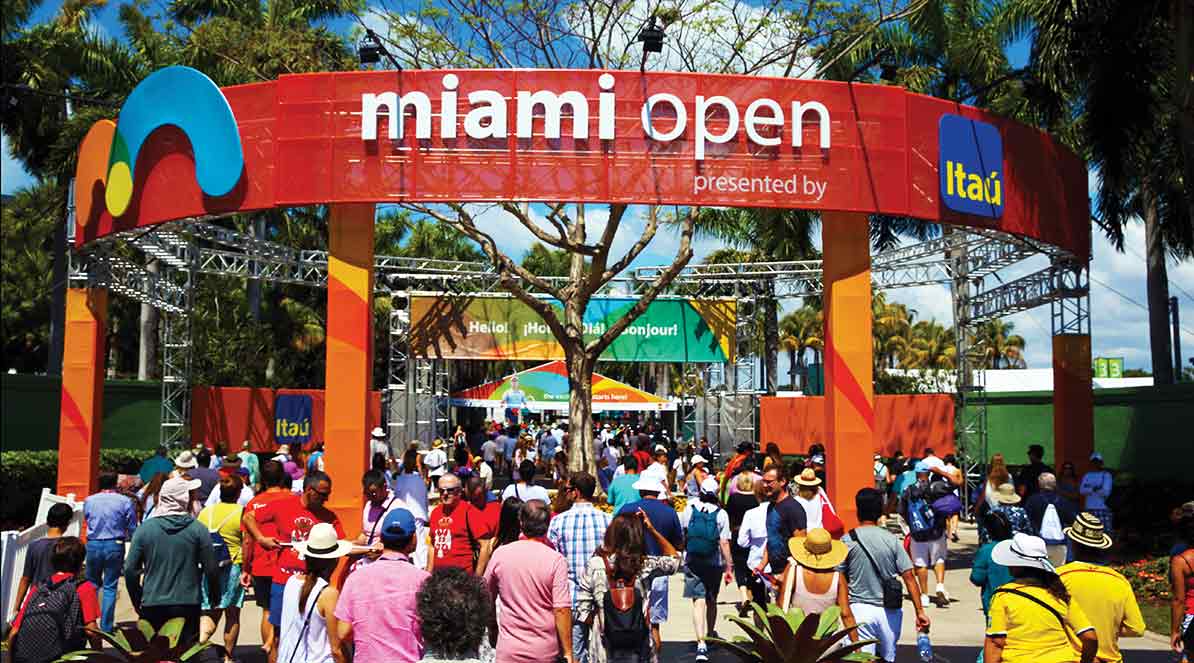 The Miami Open will take place March 21-April 3, 2016, and almost certainly in the same location for a few more seasons, despite ongoing litigation concerning control over Key Biscayne’s Crandon Park, where the tennis tournament has been held every year since 1987.

However, officials for tournament organizer International Players Championship Inc. (IPC) are not sanguine the event can continue for the nine years remaining on its lease with the county. “For the short term, the event is here and it’s healthy,” said Adam Barrett, tournament director. “We’re looking to deliver the best product it can be.”

What concerns Mr. Barrett is how viable the Crandon Park location will be in three or four years when, he says, he believes standards will change.

“There’s growth in this industry and, in order to be a top-level event, you have to keep up facilities,” he told Miami Today this week. Mr. Barrett said tournament events of the Miami Open’s size have at least three or four stadiums and are working on supplying even more courts.

The tennis center at Crandon Park only has one stadium and Mr. Barrett said that will not be enough to keep the event going. He said the stadium at Crandon Park was considered state-of-the-art when it was built for the 1993 tournament but is no longer one of the top venues on the world tennis circuit.

“We will continue to do everything we can to maintain a first-class, top-level event but, without adding new facilities at the park, we can’t maintain our status,” Mr. Barrett said. “In the next four to nine years, if we don’t make changes, we won’t have the standards for a top-level event.”

He maintains IPC cannot make any changes to the park property without receiving permission from Bruce Matheson, whose family donated the land for Crandon Park in the 1940s and does not want tournament use expanded for more stadiums.

In fact, Mr. Barrett said he believes Mr. Matheson is virtually holding IPC hostage with what he claims is his insistence on determining the use of what really belongs to the public. He also questions decisions county government has made, along with its attorneys’ research, and proposes the Miami Open would not be in its current precarious situation had IPC received support from public servants.

“Mr. Matheson has no legitimate ownership interest in Crandon Park and his alleged right by ‘inheritance’ to determine the use of Crandon Park land is based upon a complexly woven set of lies,” he wrote in a May 5 letter to Mayor Carlos Gimenez. “Nevertheless, because of the county government’s failure to pay attention to detail, Mr. Matheson now controls almost everything that is allowed to happen in all 900 acres of the park: its two miles of Atlantic Ocean beach, its picnic areas and nature center, its 18-hole golf course, its marina, its environmental treasures and its tennis center.”

Mr. Barrett wrote the letter to Mr. Gimenez to request that he and commissioners “represent the will of the citizens of the county who have voiced their overwhelming support for the tennis center improvements and the long-term future of the tournament” and also that the mayor instruct the county attorney exactly how he wishes him to proceed in response to IPC’s February appeal, seeking to reverse Judge Marc Schumacher’s September ruling in favor of the Matheson family keeping the park as it is now.

Currently, Mr. Barrett said, both sides have filed their briefs and await a hearing date in the Third District Court of Appeals which he anticipates will be at some point this fall.

“I can’t believe the mayor believes 800 acres should be controlled by one person,” he said this week in reference to the letter he wrote in May. “I felt the mayor would want this park to be controlled by elected officials to do what’s in the best interest of the public.”

Miami-Dade County has a policy of not specifically commenting on the matter of pending litigation, according to Michael Spring, special advisor to the mayor. “The county is proud of its stewardship of our outstanding parks department including our largest public park, Crandon Park,” he said in a written statement. “We strive to balance the needs of all park users with the restrictions in place on the development and use of the Crandon Park. We continue to be very supportive of the Miami Open and are working cooperatively with the tournament to ensure the ongoing success of this major sports event.”

Mr. Barrett said 72% of voters stated in the November 2012 election they wanted improvements made to the Crandon Park tennis facility. In the past, he said, county attorneys missed vital information, most particularly that the Matheson family did not have any property interest in the land and should have no right to change the deed restriction.

Mr. Barrett also said he’s not even sure if IPC will have the choice to remain at Crandon Park should the county have to ask Mr. Matheson if the lease can be renewed when the nine years are up.