Advertisement
The Newspaper for the Future of Miami
Connect with us:
Front Page » Transportation » Aged bridge to be replaced, moved elsewhere 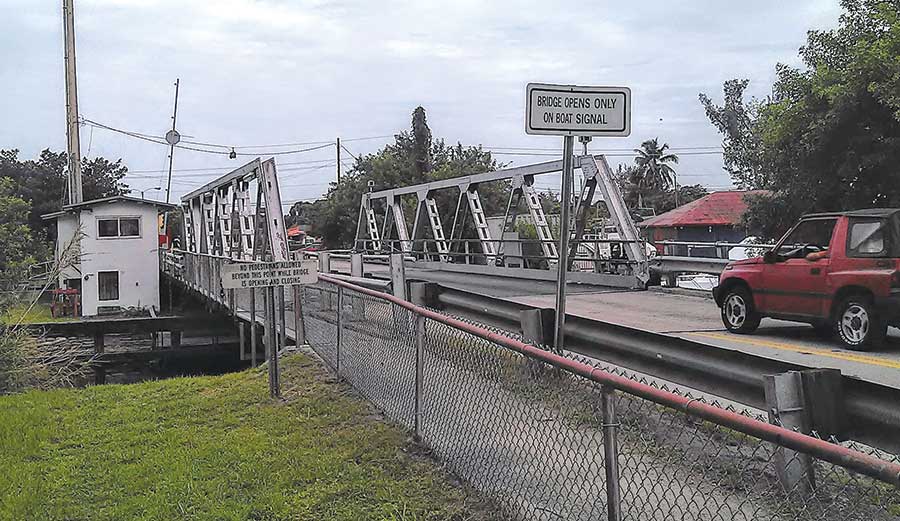 A deteriorating bridge that’s eligible to enter the National Register of Historic Places would be added to Miami-Dade County’s Economic Stimulus Program under a resolution due to come before county commissioners Sept. 1.

The Tamiami Swing Bridge on Northwest South River Drive at the Delaware Parkway just north of Northwest 20th Street would be listed for renovation in the stimulus program under a resolution by Commissioner Bruno Barreiro.

Under a 2011 county agreement, the bridge is due to be moved, with a new single leaf bascule bridge replacing it at its current site.

In March, Mr. Barreiro had co-sponsored a resolution that reallocated nearly $4 million in bond funds that were targeted for the Tamiami Swing Bridge to instead be spent on the Venetian Causeway drawbridge. “Here’s a district giving up funding on a temporary basis helping out a neighbor,” he said before the March 3 vote.

The Tamiami Swing Bridge has long needed renovation. In a May 2013 report on the condition of the 209 bridges under direct county control, commissioners were told that the county then faced a $429 million need to repair deteriorating bridges. The four with the greatest needs, county administrators told them, included both the Venetian Causeway bridges and the Tamiami Swing Bridge.

The others were the bridges on the Rickenbacker Causeway, which since have been upgraded, and the South Miami Avenue Bridge, where ongoing repair work is expected to be completed in December.

The bridge itself, Ms. Hudak noted, is a Warren Truss Span type swing bridge, one of the oldest bridges on the Miami River.

The bridge has deteriorated from age and from being hit by both vessels below and motor vehicles above, she said, which has created structural damage.

Moreover, she noted, “the existing bridge geometry does not allow for the required hydraulic water flow or the anticipated increase in both navigational and vehicular traffic along the Tamiami Canal.”

The addition of the bridge to the Economic Stimulus Plan, Ms. Hudak wrote, will allow the county to expedite procurement of construction engineering and inspection services and lab testing services, both of which are needed before construction can begin.

One Response to Aged bridge to be replaced, moved elsewhere