Advertisement
The Newspaper for the Future of Miami
Connect with us:
Front Page » Transportation » All Aboard Florida rail team on track

All Aboard Florida rail team on track 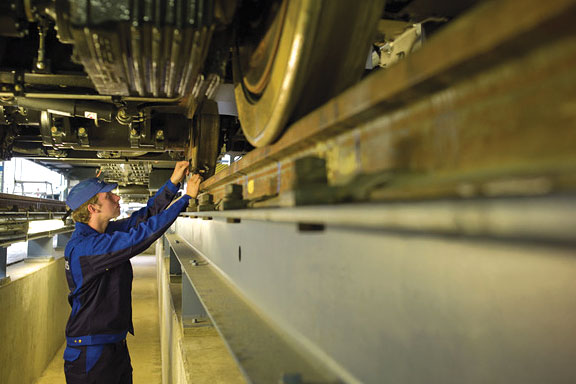 All Aboard Florida is busy lining up its corporate partners in its quest to establish a new passenger rail service, and creating new jobs in its wake.

All Aboard Florida recently selected Siemens Corp. as the full maintenance provider for its passenger rail trains connecting Orlando and Miami, starting in 2017.

As part of a 30-year contract, Siemens will maintain and service all aspects of All Aboard Florida’s passenger rail vehicles, including inspections, corrective and preventative maintenance, and provisioning of parts and labor.

All maintenance-and-service operations are to be housed at a new state-of-the-art facility south of Orlando International Airport and a new smaller complex to be built in West Palm Beach, creating full-time employment for about 70 Siemens and 40 All Aboard Florida employees.

As previously announced, Siemens is also building the trainsets for the project, which will be constructed at its solar-powered rail manufacturing plant in Sacramento.

“Siemens is extremely proud to expand our relationship with All Aboard Florida as a key technology and service partner for this important passenger rail project,” said Chris Maynard, vice president of customer services for Siemens Mobility.

“By combining our globally-inspired, modern service methodology and experience with our own technology, we are confident that the All Aboard Florida service will be among the best in the nation,” Mr. Maynard said.

“Siemens shares All Aboard Florida’s commitment to meeting the highest standards of trainset safety and reliability in the industry,” said Mike Reininger, president of All Aboard Florida. “We are pleased that, in working closely with Siemens on state-of-the-art train design and engineering, our partnership with the company has grown even stronger.”

The news comes just weeks after All Aboard Florida announced that it had reached an agreement with Archer Western to improve rail infrastructure on the corridor for its new passenger rail service.

Archer Western will provide construction-management and general-contracting services for the project, which include safety improvements and upgrades, track work, rail signalization and structural construction. It will also perform work on 185 grade crossings; install quiet zones, where applicable; and build a new running repair facility in West Palm Beach.

“Modernizing the rail infrastructure is central to All Aboard Florida’s new rail operations and to our commitment to public safety,” Mr. Reininger said.

All Aboard Florida says it is investing $1.5 billion to modernize the historic Henry Flagler rail corridor, improvements needed for its passenger rail trains.

Work crews will adhere to pre-set work schedules that All Aboard Florida has coordinated in advance with communities along the corridor. Work on safety upgrades at grade crossings and quiet zones will be performed at the same time.

“Archer Western is proud to partner with All Aboard Florida to create this new passenger-rail system,” said Daniel P. Walsh, Archer Western president.

“We believe the service will transform the way people move between South and Central Florida, and will give residents and visitors a safe and comfortable alternative to highway-and-air travel,” he said.

Archer Western has led major transportation projects across Florida and throughout the country, including SunRail, the popular transit system in Orlando.

Construction for the All Aboard Florida project is expected to create more than 10,000 jobs annually during construction, and 2,000 permanent jobs once service begins.

In the US, Siemens is providing rail vehicles, locomotives, components and systems to more than 25 agencies in major cities including New York, Boston, Philadelphia, Atlanta, Houston, San Diego, St. Louis, Washington, DC, and more. Cities also rely on Siemens to provide traction-power substations and electricity transmission, as well as signaling and control technology for passenger rail and transit systems.

With 343,000 employees in more than 200 countries, Siemens AG reported worldwide revenue of $98 billion in fiscal 2014. Siemens in the US reported revenue of $22.2 billion, including $5.2 billion in exports, and employment of about 50,000 people throughout all 50 states and Puerto Rico.

All Aboard Florida is an intercity passenger rail project being developed by Florida East Coast Industries, a commercial real estate, transportation and infrastructure company.

3 Responses to All Aboard Florida rail team on track