Advertisement
The Newspaper for the Future of Miami
Connect with us:
Front Page » Communities » Streetscape to revamp Miracle Mile 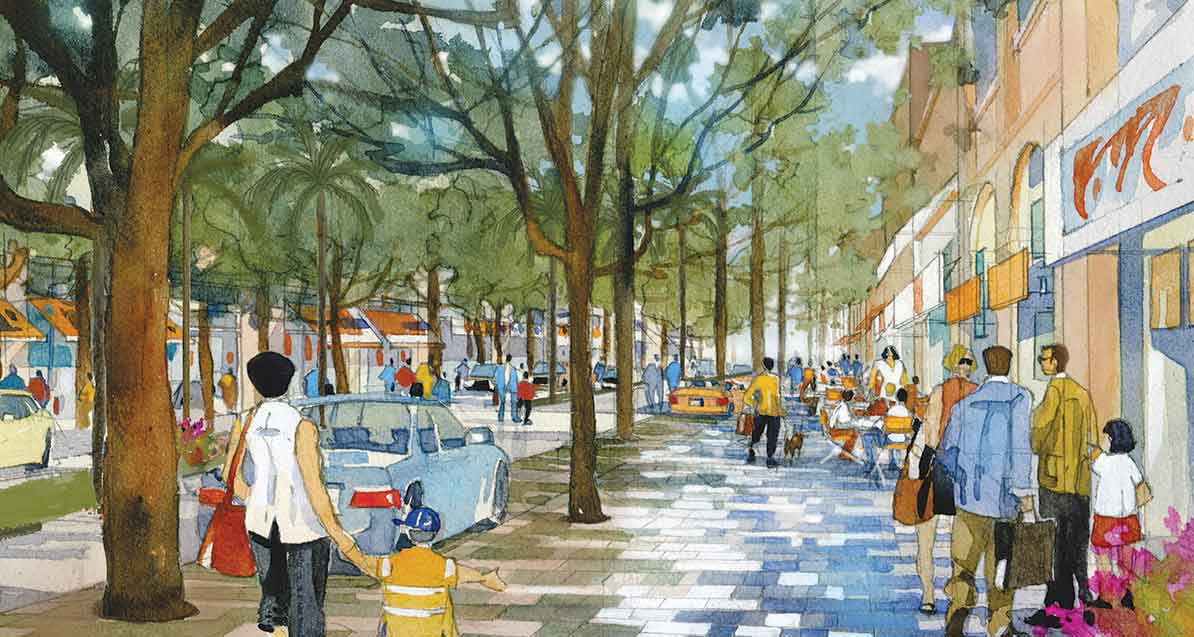 The Coral Gables Streetscape, a $20 million plan to redesign Miracle Mile and a section of Giralda Avenue, is nearing the end of the design phase and construction is expected to begin in January, says Mayor Jim Cason, after a final city commission vote in August.

The goal is to revitalize downtown, create pedestrian-friendly streets and bring business back to Coral Gables, Mr. Cason said.

Although not yet finished, the new pedestrian-centric design will call for sidewalks on Miracle Mile to be widened from 15 feet to about 23 feet, creating space for spillout seating and displays in front of restaurants and shops, said Earl Jackson, who leads the design team from New York firm Cooper, Robertson & Partners.

To make room for the sidewalk, the city is to replace 45 degree angle parking with parallel parking. Giralda is to become curbless, with retractable bollards that can be raised to block auto traffic for special events.

Streetscape will also give downtown a facelift. Wider sidewalks on Miracle Mile will create room for three rows of trees on each side of the street, which Mr. Jackson said should give the impression of a long, linear park. He said a new design of blue-and-white paving stones meant to mirror the South Florida sky will replace the current pink concrete slabs.

Down the center of Giralda, plans call for a row of trees to divide lanes of traffic and for a canopy of lights strung above the street to replace concrete lampposts. Mr. Jackson said the curbless street will be paved with stones set in a pattern of overlapping concentric circles meant to suggest raindrops.

“Our downtown is shopworn to say the least,” Mr. Cason said. “It doesn’t reflect our vision for Coral Gables. As I like to say, if we didn’t do something like this soon, it would be a miracle if anyone walked on our mile.”

Marina Foglia, executive director of the Coral Gables Business Improvement District, said this project has been her organization’s top priority for 15 years. She said local businesses fully support Streetscape, which is why they have agreed to shoulder 50% of the cost in a public-private partnership. Half of Streetscape’s funding is to come from the city; a special assessment on downtown property owners is to fund the other half.

Wayne Eldred, owner of Tarpon Bend Raw Bar and Grill on Miracle Mile and chair of the Coral Gables Chamber of Commerce, said the project will create the kind of energy that will make families want to stroll through Coral Gables after a meal. Mr. Eldred said even a free activity like walking will inevitably lead visitors to spend more money in shops and restaurants along the way.

But Jorge Kuperman, an architect whose owns an office on Giralda, said he doesn’t expect to get any increased business from window-shoppers. Instead, he said he expects to see his property’s value rise in more ways than one.

“Being on a nice street and being able to entertain clients in restaurants and coffee shops, it’s a plus,” Mr. Kuperman said. “And as subjective as it may sound, this place makes me proud.”

But rising property values might not be a boon for every business. Ms. Foglia said it’s possible that smaller shops might be pushed out of Miracle Mile by national chains with more resources. She said the Business Improvement District will do what it can to protect longstanding vendors.

Mr. Eldred, who saw his property taxes shoot up by $35,000 a year when his landlord sold the building that houses Tarpon Bend two years ago, said that’s just a cost of doing business. He said he thinks rents in Coral Gables are inflated and hopes that the Streetscape will raise the location’s actual value to be in keeping with what business owners currently pay to be there.

Mr. Cason said no major obstacles remain to stop Streetscape from breaking ground next year. There will be at least one more public hearing, he said, and then the final design will be presented for a yes-or-no vote at a city commission meeting in the first week of August. Mr. Cason said he expects the vote to be unanimous.

The mayor said the design team originally estimated construction would take 18 months, but he said he would like it done in a year.