Advertisement
The Newspaper for the Future of Miami
Connect with us:
Front Page » Top Stories » Big award for tech guru Manny Medina 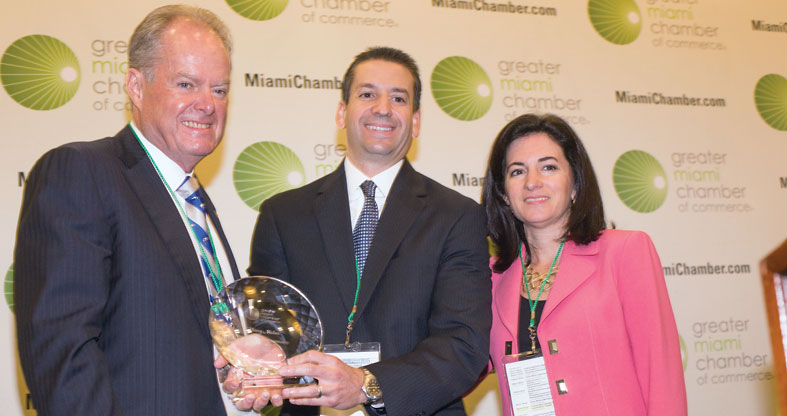 The founder and board chairman of eMerge Americas, Mr. Medina said he was humbled and honored by the recognition. “It is very much your award,” he told the business leaders assembled for the June 5 ceremony at the Hilton Miami Downtown. “I’m proud of how you turned out and responded to the call.”

Technology affects us all, Mr. Medina said. “We sit on the epicenter of a multi-trillion-dollar opportunity.”

Mr. Medina has spent more than 30 years as a successful businessman with expertise in technology, finance, international business and government contractor. In 1980, he founded Terremark as a commercial real estate company, constructing office buildings. Mr. Medina raised over $1 billion for Terremark, shifted it into information technology services throughout the US, Europe, Latin America, the Middle East and Asia and sold it to Verizon Communication in 2011 for $2 billion.

Credited with setting Miami as the technology hub of the Americas, Mr. Medina said everything for eMerge America coalesced with the community’s help. “All of you came together in a way I have never seen in this city before, and I’ve been here for a very long time,” he said. During this year’s second eMerge Americas technology conference, Poland and Italy closed a deal. “Think of that,” Mr. Medina said. “And it happened right here in Miami.”

He thanked the business community for its help and support, closing by saying, “I’m not sure how Henry Flagler would have felt about someone receiving this award with a Cuban accent.”