Advertisement
The Newspaper for the Future of Miami
Connect with us:
Front Page » Communities » Historic site could get 36-story tower

Historic site could get 36-story tower 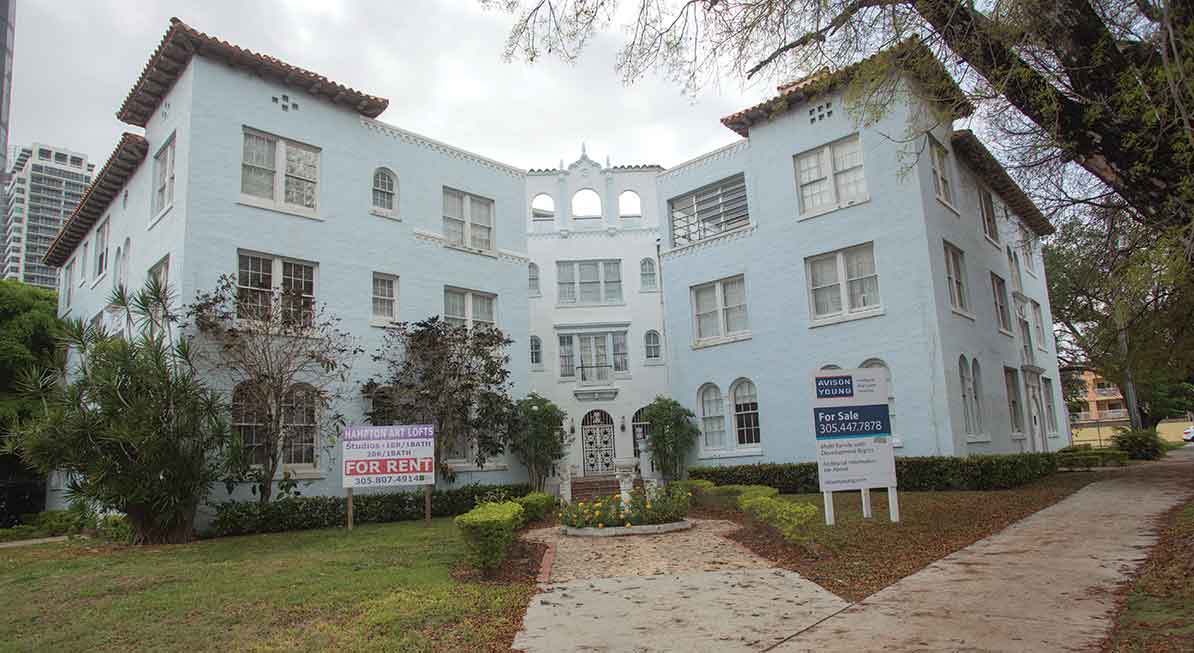 A historic 20-unit apartment building in Edgewater is up for sale, and hotel owners and operators have expressed interest in buying the building and turning it into a hotel.

Aside from the 20-unit apartment building, also up for sale is the 7,500-square-foot parking lot behind it as well as 205,200 square feet of transferable development rights that are part of the property, said Stephen Nostrand, senior vice president of Avison Young in Coral Gables. The real estate company is overseeing the sale listing of the building.

The City of Miami designated the two apartment buildings as the Beverly Terrace Historic District in 2003. Per city laws, the historic designation gives the buildings some protection from demolition because a city board would have to approve issuance of a certificate for demolition.

Based on the interest in the building so far, developers don’t seem interested in demolishing the structure.

“We’ve gotten a lot of calls from a lot of developers who want to convert the current 20 units into a hotel and build a new structure on the 7,500 [foot] lot,” Mr. Nostrand said. “The current zoning allows you to go very high, so in theory someone could build a small, very tall building on that 7,500 feet and accommodate a hotel.”

Under the current zoning for the site, a developer could build as high as 36 stories, Mr. Nostrand added.

He added that any future development on the 7,500-square-foot parking lot behind the building would have to fit in with the historic character of Beverly Terrace.

“The city is not going to permit for anybody to come in and put a fancy modern glass structure, the kind we’re seeing predominantly in Edgewater, connected to a building built in [1925]. It doesn’t fit the character of the neighborhood and any development would require the input and discussion of neighbors,” Mr. Nostrand said. “The city is very sensitive to existing historic structures.”

Also up for sale are 205,200 square feet of air rights, or the unused air space above the apartment building. Air rights, referred to as the transfer of developmental rights (TDRs), are essentially the unused air space above one-, two- and three-story structures. The owner of a shorter building can sell TDRs to a developer of a high-rise building. The air rights allow the developer of a high rise to add more square footage to the base floor area that he’s allowed to build.

According to the Miami 21 zoning code, qualifying sellers of TDRs are owners of historic buildings or owners of buildings that are part of a historic district. Per the code, the owner is to then invest proceeds from the sale of TDRs into renovating the historic structure.

The purchase of TDRs has been particularly common in the MiMo district between Northeast 50th and 79th streets along Biscayne Boulevard, where one- and two-story hotels and motels have been renovated from the proceeds of TDR sales. TDRs sold by the private sector could fetch about $8 to $9 per square foot, industry experts have told Miami Today.

“If someone wanted to buy just the building [Beverly Terrace Apartments], then the current owner could keep those development rights and transfer them to someone else,” Mr. Nostrand said.

Architects Martin Luther Hampton and E.A. Ehmann designed the buildings in 1925. They designed a Beverly Terrace complex that according to records was to include four similar-looking buildings on all four corners of Northeast 33rd Street at Biscayne Boulevard.

Mr. Nostrand said the asking price for the apartment building, the parking lot and the TDRs is $7.9 million.

One Response to Historic site could get 36-story tower