Advertisement
The Newspaper for the Future of Miami
Connect with us:
Front Page » Government » Miami to seek Marine Stadium operator 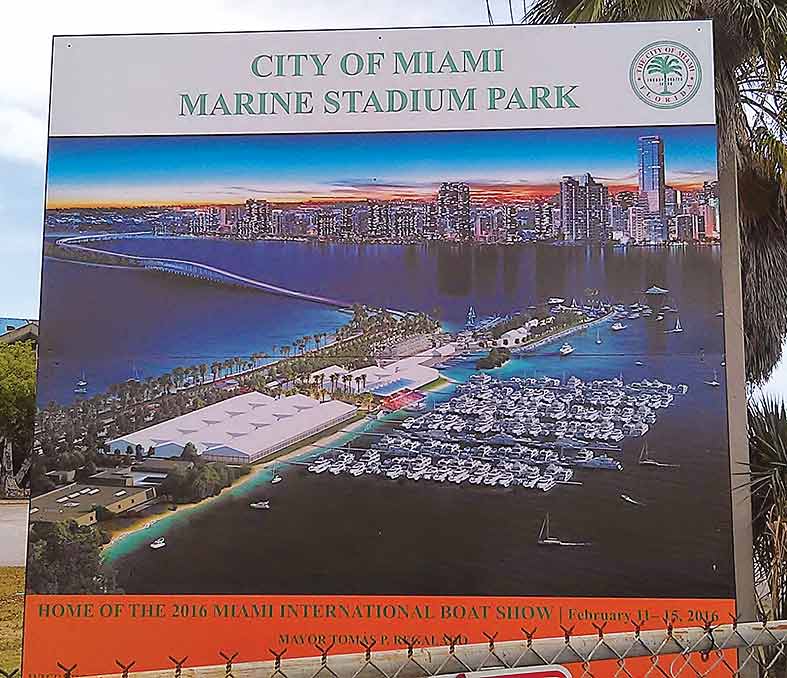 Miami administrators are working on a request for proposals to attract an operator to handle a restored and reopened Miami Marine Stadium.

City commissioners could be asked to vote on an operations plan May 14.

Meanwhile, plans are moving ahead to breathe new life into the iconic concrete waterfront stadium on Virginia Key, idled and deteriorating since Hurricane Andrew in 1992.

At the commission’s meeting April 9, Don Worth, a long-time advocate for restoration of the stadium, said he was pleased to hear that the city manager’s office is working to secure an operator for the venue.

“The sooner you get a [request for proposals] out for an operator, things will be a lot simpler and other funding opportunities will open up,” Mr. Worth told commissioners.

Deputy City Manager Alice Bravo told commissioners that on May 14 the administration will have “a very good [request for proposals] in hand,” and a proposed governing structure for all of Marine Stadium Park.

The city is working to build a flex park adjacent to the stadium to host the Miami International Boat Show and other activities.

The nature and extent of those other activities have been the subject of debate, and led to a lawsuit against the city by the Village of Key Biscayne. Village leaders fear over-use of the stadium and grounds, leading to a crippling addition of traffic on Rickenbacker Causeway, the only road in and out of Key Biscayne.

Even city commissioners have argued about the extent of development on Virginia Key, while all strongly support restoring marine stadium.

Earlier this year, City Manager Daniel Alfonso said the city always planned to develop Marine Stadium Park, “and now we have a partner to help.”

The partner he refers to is the National Marine Manufacturers Association, the group that puts on the popular boat show each February.

On Jan. 8, city commissioners approved a license with the association to host the boat show on land and water surrounding marine stadium. Commissioners also approved spending up to $16 million to improve the site, to be paid for by a bond sale, although it directed the city manager to explore other funding sources and report back.

In exchange, the association is to pay the city $1.1 million a year and 50% of food and beverage sales income at the show. Renovation of the stadium is not part of those improvements. There is a separate program to renovate the stadium.

The license is not for a fixed term, and may be terminated or revoked by the city at-will. Although there is no binding long-term agreement between the city and the association, the city can review the license after five years.

In 2007, city officials began a years-long process of writing, amending and finally adopting a master plan for the development of Virginia Key in 2010.

By securing the boat show, the master plan for the Key is back in play.

This has led to officials and commissioners talking about other uses for the property that surrounds the abandoned stadium, including soccer fields for youth and adult leagues.

The latest plans and renderings show the large aging parking lot southeast of the stadium replaced by a wide-open green area, covered with artificial turf.

Plans for the area around the stadium include improved water and sewer structures, drainage and lighting, and strengthening the surface areas as green space able to stage activities and special events.

The boat show would use temporary event structures – large tents – with elaborate layouts, wood floors, air conditioning and more. The plan also calls for temporary docks in the basin.

Mr. Worth said April 9 he thinks getting an operator for the stadium would “ease tensions” between the city and Key Biscayne officials.

“Key Biscayne could be a partner in the recreational fields,” he suggested.

The latest issue raised about the work on Virginia Key was the amount of time needed or allotted to the boat show, and it caused Commissioner Marc Sarnoff to threaten to pull his support of the flex park plan.

On April 9, when an amended license was presented showing 160 days were sought for use of the city’s property for the boat show, Mr. Sarnoff objected.

“This is where I’m getting off the bus,” he told fellow commissioners.

Holding up a rendering showing the area next to the stadium as four green soccer fields, Mr. Sarnoff said, “This park was attractive to me.” However, with a prolonged period of use of the land for the set-up and take-down of the boat show and the event itself, he was not happy with the proposed schedule.

The flex park was going to be a great opportunity for kids and adults, he said, “and I no longer think that’s the true intent of the administration.”

Ms. Bravo said the reason for longer use for boat show activity is that 2016 will be the first time the city hosts the show on Virginia Key, and much of how it will play out has yet to be seen.

Ms. Bravo also pointed out that no artificial turf now exists there. The turf surface will not get its first rolling out until after the 2016 boat show, she said.

Mr. Sarnoff said he was concerned that the boat show’s presence would keep others from using the flex park for months.

Mr. Sarnoff said the boat show organizers ought to be able to dismantle the site in 30 days.

“It can be done,” said Commissioner Francis Suarez.

Ms. Bravo said they preferred 73 days to set up the area for the 2016 boat show, saying that would be ample time to “work out the kinks.”

“This lets us learn the timeline, and gives us experience for the second year of the show,” she said.

“I understand… This year, she has a point,” Mr. Sarnoff said.

He suggested he could support the boat show use if all boat show property and equipment is removed within 30 days of the end of the show.

“I implore you, keep a very tonight leash on this show,” Mr. Sarnoff told administrators.

The commission approved a modified license with the association, which spells out an arrangement for the addition of electric utilities to the property estimated at $3,306,000, to be equally funded by association and the city.

A condition of the vote was a requirement that the association be clear of the property within 30 days of the close of the boat show.

Ms. Bravo promised commissioners that the new soccer fields will be in place within 31 days of the close of the boat show.

At the April 9 meeting, commissioners also reviewed other funding options to come up with the $16 million for improvements to Marine Stadium Park.

“These are a few alternatives – none particularly palatable,” said Chris Rose, budget director.

Labeled Alternative 3, “Last Year Fund Balance,” it reads: The city has ended FY 2013-14 with an estimated fund balance higher than the threshold of $103.6 million required by the city’s financial integrity principles. We could recognize approximately $5 million in the current year and program these funds toward the Marine Stadium [Park]. These funds were to be used to maintain a fund balance in future years above the principles. If these funds are used for the [flex park] and not maintained in the fund balance, then it is likely that the city will be required to budget more than $5 million of reserves just to remain in compliance with the principles.

Labeled Alternative 4, “New Revenues in the Current Year,” it reads: There are two revenues that were not budgeted in the current year, but have been received since October 1, 2014. There is $1.4 million from a settlement with a waste hauler as presented to the commission during the December 11, 2014, City Commission Meeting. Also, as part of the Skyrise/Bayside agreement, the city was to receive $3.75 million when Bayside refinanced its current debt obligations. This occurred in December 2014. The city received the funds on December 23, 2014, and deposited thereafter. These two funds were anticipated to be recommended for additional services such as additional fire apparatus purchases in the mid-year budget amendment.

After reviewing these alternatives, Mr. Rose said it was the administration’s recommendation to continue with the plan as presented in January. Funding would come from special obligation bonds with a repayment schedule of 15 to 20 years, and with funds pledged from available non-ad valorem revenues in the General Fund.

Mr. Alfonso pointed out the $16 million is for the flex park improvements and does not include money for restoration of the stadium itself.

Also related to the stadium, Mayor Tomás Regalado succeeded in gaining a promise from Miami-Dade County to allow the city to retain about $3 million to be used only for restoration of the stadium. An extension was sought of a 2010 county allocation. It was clarified and stressed at the April 9 commission meeting that none of the county finds would go toward the flex park.

One Response to Miami to seek Marine Stadium operator