Advertisement
The Newspaper for the Future of Miami
Connect with us:
Front Page » Communities » Bus kiosk or info center? 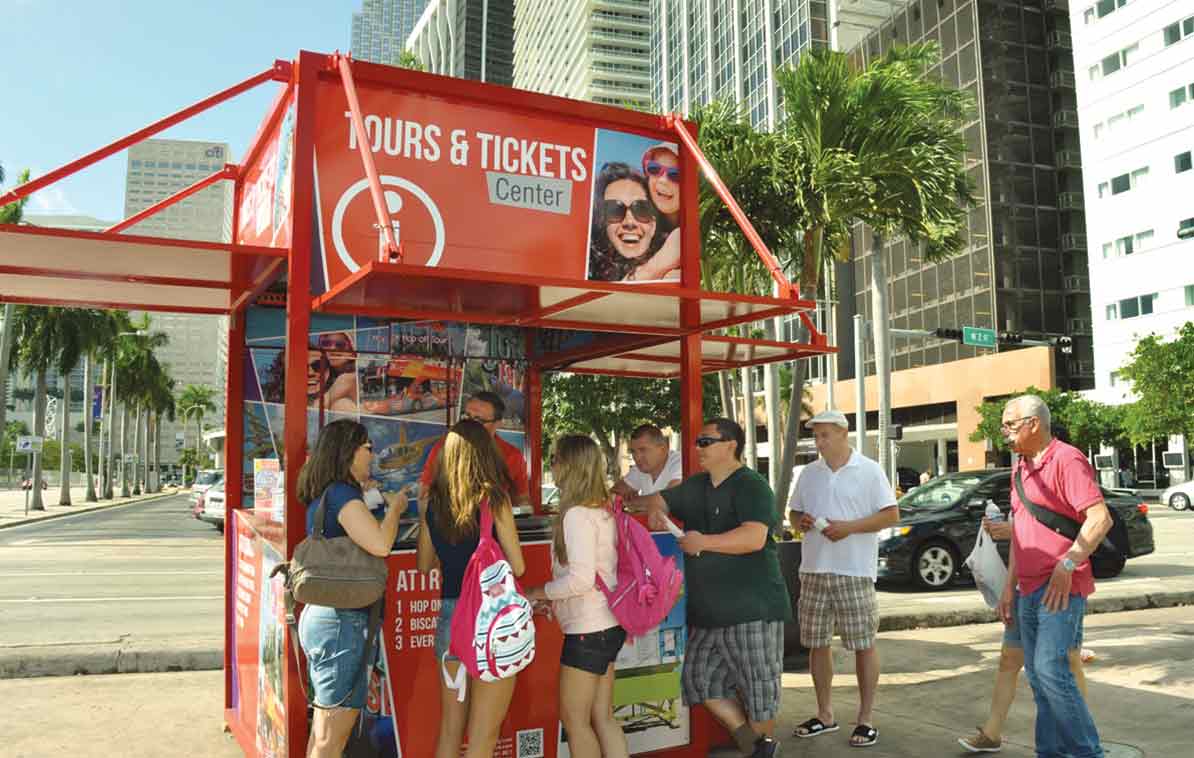 The bright, multi-colored kiosks – roughly the size of an ice fishing shanty – were established in key spots in September, in the large parking lots owned and managed by the Miami Parking Authority.

Visitors to downtown and the waterfront are often attracted to the kiosks first, before venturing on their own to Bayfront Park, Bayside Marketplace or nearby AmericanAirlines Arena and its neighbors, Museum Park and the Perez Art Museum Miami.

Where the kiosks were ultimately located is by design – high-traffic areas, both vehicle and pedestrian.

The main reason for the kiosks is to sell bus sightseeing tour tickets, but not surprisingly the staffers manning the kiosks are approached by curious tourists with a variety of inquiries, from who founded the City of Miami to asking for suggestions on a good restaurant.

“People arrive at the booths asking all sorts of questions. They’ll say, ‘We’re in Miami for the week, what activities do you recommend?’ It’s amazing,” said Leyla Rojas, CEO of City Sightseeing Miami.

People ask questions about the best place to stay, where to eat, and what shows or plays are being performed in Miami, she said.

Her company representatives, who are briefed on the places and events the Magic City offers, hand out free company-produced maps and are quick to point out the most popular sites in the area, she said.

Three tour and ticket centers are scattered inside the long, linear Lot 19 run by the parking agency.

According to Rolando G. Tapanes, authority director of planning and development, Lot 19 is one large municipal parking lot comprised of six sections.

Last year, the Off-Street Parking Board approved a request for proposals from bus tour companies interested in leasing space at Lot 19 for a sales kiosk.

Authority CEO Art Noriega told the board then that staff found City Sightseeing Miami’s proposal responsive to the request, and recommended negotiating a contract.

In its proposal, the bus tour company submitted several options for locating sales kiosks throughout Lot 19, and a potential range of lease fees.

“They are providing guests with knowledgeable information regarding Miami’s main sites, and promoting the city to foreigners,” she said.

“It is proven world-wide that having tourist information kiosks reflects in more spending in time and money from that guest [who] receives information about the city. It is a win-win for the city, the guest and the tourist operators as well,” said Ms. Rojas.

Along will selling tickets for sightseeing bus tours, the personnel in the kiosks sell tickets to many of the most popular attractions in the Miami area including Miami Seaquarium, Zoo Miami, Jungle Island, boat rides around Biscayne Bay, Art Deco Walking tour, Water Taxi and more.

The kiosks, which have pop-up panels providing some shade for waiting visitors, are open daily from 9 a.m. to 6 p.m.

In its introduction to its proposal, the City Sightseeing company said it is a worldwide operator of open-top buses and specializes in hop-on, hop-off tours in 107 cities.

The company began in 1992 by operating bus tours during the World’s Fair in Seville, Spain. The company provides information in multiple languages on the history, culture and points of interest along tour routes.