Advertisement
The Newspaper for the Future of Miami
Connect with us:
Front Page » Business & Finance » River mega-marina first of its kind globally 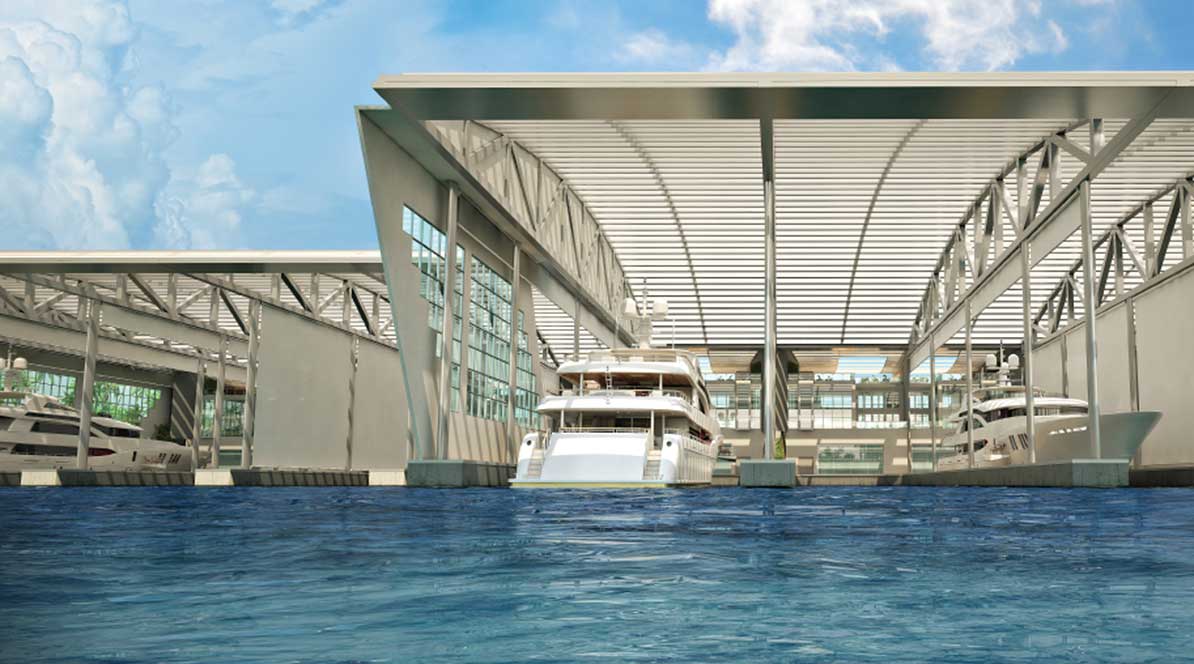 The architects working on a project on the Miami River for mega-yachts say it is the first of its kind in the world – everything in one location for the owners of the big boats.

The unique nature of the project came up Monday when the Miami River Commission approved an updated proposal for property owner and developer Homero Meruelo.

Formerly called Miami Mega Yacht Marina, the mixed-use project has been renamed SeaVault, alluding to a protective environment for the very exclusive vessels and their contents.

SeaVault is designed as a temporary home for 14 mega-yachts with living quarters for captain and crew. The plan includes a clubhouse, tennis court, swimming pool, cold storage building and private vehicle parking on a secured site with tropical landscaping.

One year ago this month the river commission approved the plan’s first version.

The changes are mostly cosmetic, according to the developer’s representative Tony Rodriguez-Tellaheche.

He said since that time Bermello Ajamil & Partners Inc. was brought aboard on the project as architect of record due to the firm’s expertise in water-related projects, both nationally and internationally.

The current design was based on Mr. Rodriguez-Tellaheche’s original design and concept.

Explaining some of the changes to the commission this week was Scott A. Bakos, an architect with the Bermello firm.

He said they’ve made a few refinements including a more rectangular courtyard between the marina spaces and the clubhouse, and a few curves have been added to the ancillary spaces where the captain and crew quarters are located.

The curved inner walls are to “make it very sexy, for lack of a better word,” said Mr. Bakos.

The architects said they’re excited to be involved with a project of this unique nature, saying it will add tremendous value to the riverfront.

The roofing material is to be a Kallwal roof system, which allows natural light to penetrate the interior.

“This will allow working during the day without the necessity of extensive artificial lighting,” said Mr. Rodriguez-Tellaheche.

The developer is shooting for LEED (Leadership in Energy & Environmental Design) certification, and the goal is to garner a silver rating. LEED is a green building certification program that recognizes best-in-class building strategies and practices.

Each of the 14 units will be sold.

“The entire unit – it’ll come as a package,” Mr. Rodriguez-Tellaheche said. The yacht owner will purchase one slip that comes with the captain and crew quarters.

“The idea is to give them a home port,” said Mr. Rodriguez-Tellaheche.

The developer says the project will bring to the Miami River the very sought-after mega-yacht industry, which has gravitated toward Broward and Palm Beach counties.

Although some renderings show a helicopter pad atop the clubhouse, Mr. Bakos said that’s not part of the current plan.

The concept of the “all-inclusive environment,” combing covered vessel storage and attached captains’ and crews quarters, was developed by Mr. Rodriguez-Tellaheche.

After the meeting he said, “I am proud of this, because, as I mentioned in today’s presentation, there are covered yacht structures, some offering a variety of amenities like storage and toilet facilities. However, I know of no other facility in the world where the owner and captain, as well as the crew, can stand behind a two-story glass wall inside their quarters and look right at their vessel, all under the same roof.”

The owner is working in cooperation with MCM Construction. The developer anticipates the plans and permits to be completed toward year’s end, with construction starting in early 2016.

4 Responses to River mega-marina first of its kind globally