Advertisement
The Newspaper for the Future of Miami
Connect with us:
Front Page » Communities » 5-year downtown ePrix deal in works 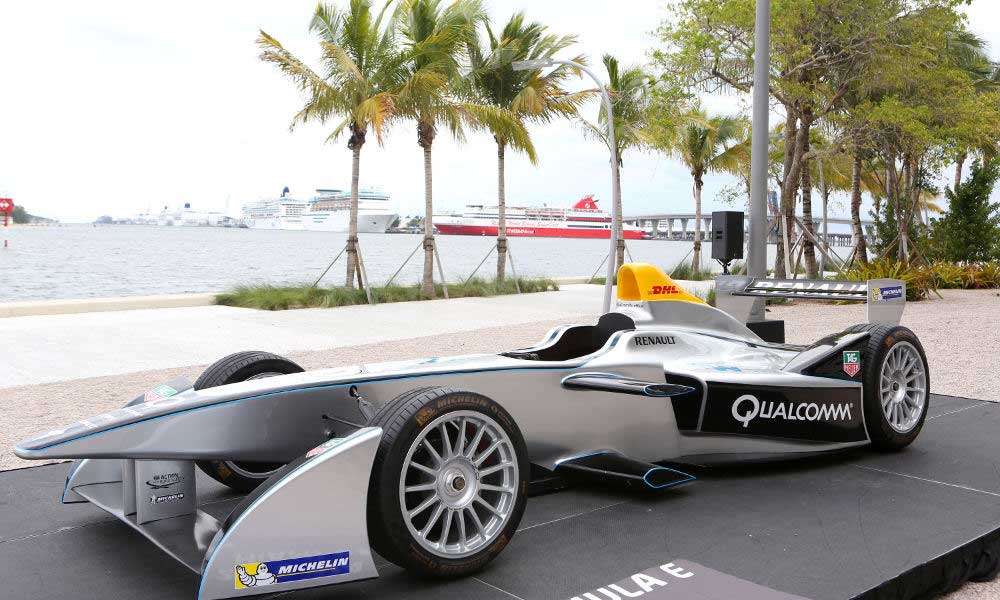 As days wind down to the inaugural Miami ePrix downtown March 14, city commissioners will consider cementing a deal to host the Formula E races for the next five years.

Mayor Tomás Regalado is today (2/26) to bring to the commission a resolution to authorize an agreement with Formula E to run the FIA Formula E Championship – the world’s first fully-electric racing series – yearly for five years.

A draft agreement says it would cover five Formula E championships downtown, including this year’s inaugural and running through 2019.

The cars have a maximum speed of 140 mph, and can accelerate from zero to 62 mph in three seconds.

In the agreement, Formula E would apply for permits, street closures and other plans with the city and finance all approvals and permits. Formula E must also pay for police, fire, and emergency personnel on site before, during and after races, the draft agreement says.

“They pay for everything,” Mayor Regalado told Miami Today on Tuesday.

The mayor said everything is done for this year’s race. “They already have the permit for this year… The resolution enters into an agreement for the next five years,” he said.

“This year is already done. DOT [the Florida Department of Transportation] is on board, and all the stakeholders, AmericanAirlines Arena… they are going to be using the bayfront,” the mayor said.

He said race organizers have an agreement with Miami-Dade County to use Parcel B, a stretch of open waterfront east of the arena. The race route shows much of Parcel B being used as Pit Lane.

There’s no rush to approve the extended contract with race organizers, said the mayor, but it will be nice to get the commitment. “The race is on, no matter what happens Thursday,” he said of the March 14 event.

Last October, city officials met with organizers to announce the race date and route. The track in the heart of downtown makes its way under the MacArthur Causeway and around the arena.

Last fall, the mayor said, “This event will help to make Miami more of a sports city. In addition, we will show the younger generations that you may have motor racing without noise or pollution.”

The Miami ePrix is set along Biscayne Bay incorporating the backdrop of the city skyline. At 2.17 km and featuring eight corners, the temporary street circuit has been produced by track design company Ayesa. The track boasts a number of long straight legs and 90-degree corners on Biscayne Boulevard, with a pit mid-way around the lap at turn six.

Mayor Regalado said he’s excited about having car races downtown again, as the city had decades ago, “although they won’t be noisy” this time. The electric cars don’t have the traditional roaring engine of traditional Formula 1 cars.

Of the race organizers he said, “They’ve done their homework. They made presentations to all the stakeholders.” And the people who live downtown know what to expect, he said.

“This is not going to be an Ultra,” he said, referring to the annual electronic music festival in Bayfront Park that draws complaints about noise and disruptions.