Advertisement
The Newspaper for the Future of Miami
Connect with us:
Front Page » Transportation » Downtown passenger rail has just one shot 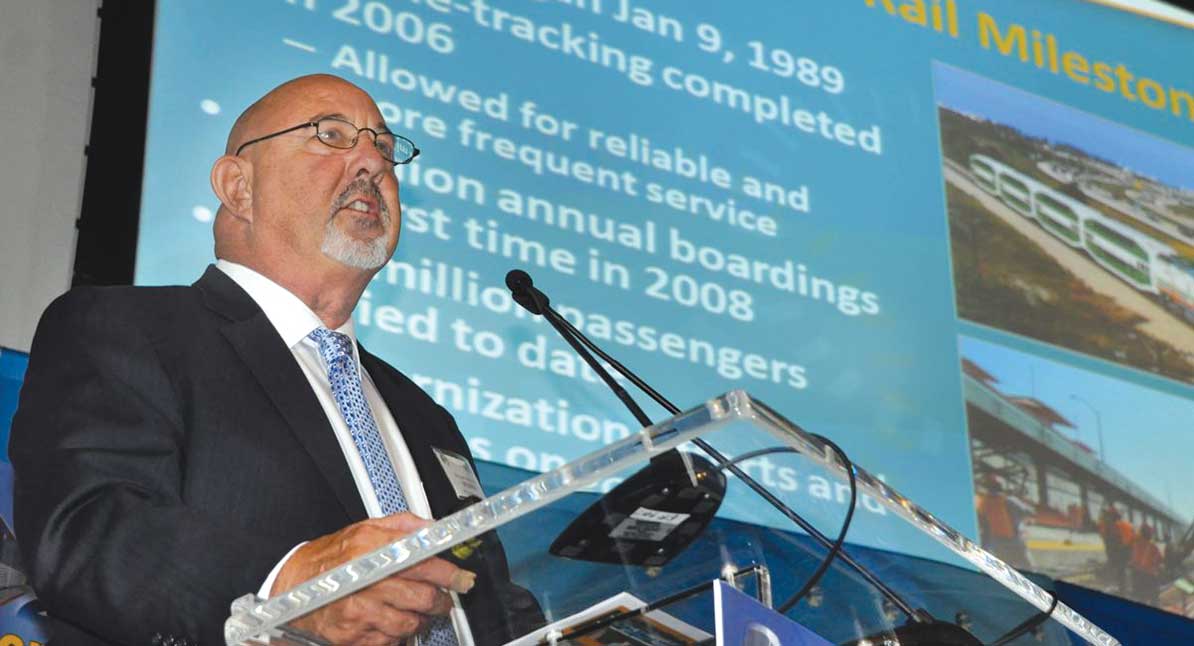 Plans to expand a passenger train’s service area to downtown Miami depend on obtaining $69 million in public funding within two months.

The issue: The expansion would cost about $69 million. The authority, which says it doesn’t have the money, has about two months at the most to solidify funding options. If plans don’t pan out, the authority says it would have missed the one-time opportunity to provide service to downtown Miami.

“I don’t know what we do if we fail in this effort,” he added. “I don’t see another way to get into downtown Miami other than in the same spot that All Aboard Florida has determined we can share with them at our expense.”

All Aboard Florida, a subsidiary of Coral Gables-based Florida East Coast Industries, plans to run an express passenger train to link Miami and Orlando. All Aboard is building a major train station, Miami Central, in downtown Miami.

It has said it can accommodate Tri-Rail trains at that station. But public funding is needed to cover the $69 million cost.

Of the $69 million infrastructure cost, about $20 million is needed specifically for rail infrastructure, or to cover the cost of work on the actual tracks. That includes upgrades at crossings, warning signals and dispatch upgrades. Another $1 million of the $69 million overall cost is needed to allow SFRTA to use the Florida East Coast Railway corridor, meaning the same FEC tracks All Aboard Florida will use in Miami-Dade County.

Mr. Stephens said that the authority is to seek this $21 million funding from the Florida Department of Transportation (FDOT).

“We think that’s a legitimate role for FDOT to assume,” Mr. Stephens said.

What’s left? About $48 million needed specifically for infrastructure upgrades at Miami Central station. The upgrades are needed in order for Tri-Rail trains to pull into the station.

So far, the most feasible option has been tax-increment financing from the Southeast Overtown/ Park West Community Redevelopment Agency.

The CRA includes the area where Miami Central is to be built. Under tax-increment financing, future property tax yields, which are expected to increase once the Miami Central station rises in downtown, would be dedicated to reimbursing the infrastructure cost for accommodating Tri-Rail trains at All Aboard’s station.

Mr. Stephens said that All Aboard Florida could build the infrastructure needed for Tri-Rail trains at Miami Central and then be reimbursed over time.

Mr. Stephens said he has been meeting with Miami-Dade County, City of Miami and CRA voting officials to discuss funding options.

“In terms of understanding the vision and what we’re trying to accomplish, almost all of them were able to see the value,” Mr. Stephens said. “The problem is when we start carving up resources. The issue is this is a one-time good deal.”

The push to expand Tri-Rail service began recently, perhaps as a result of a state-funded track upgrade. The upgrade allows trains running on CSX tracks in West Miami-Dade to switch onto FEC tracks that run in the eastern part of the county. The switch would occur at Northwest 71st Street. While CSX and FEC tracks meet there, only recently was the infrastructure added that would allow a train to switch from one set of tracks onto the other.

In Miami-Dade County, Tri-Rail trains currently run on CSX tracks in the western part of the county.

Supporters of the initiative to bring Tri-Rail trains to downtown Miami say that it would provide passengers a one-seat ride from as far north as Palm Beach County to downtown Miami. In addition, they say the $69 million cost is much less than what would be needed if SFRTA were doing the expansion on its own, as SFRTA doesn’t have to acquire land for this expansion.

If plans pan out, the authority would divert about every second train toward downtown Miami.

If he had to put a deadline for obtaining the $49 million needed for the Tri-Rail expansion, Mr. Stephens said it’s between six and eight weeks.

“And I’m government. I’m not used to moving this fast,” he said.

At some point, he added, All Aboard Florida is “going to have to make a decision and either have a level of comfort that all these partners will provide the funding or they’re going to have to take care of their investment. They can’t hold off forever.”

18 Responses to Downtown passenger rail has just one shot