Advertisement
The Newspaper for the Future of Miami
Connect with us:
Front Page » Government » Swap one old courthouse for another?

Swap one old courthouse for another? 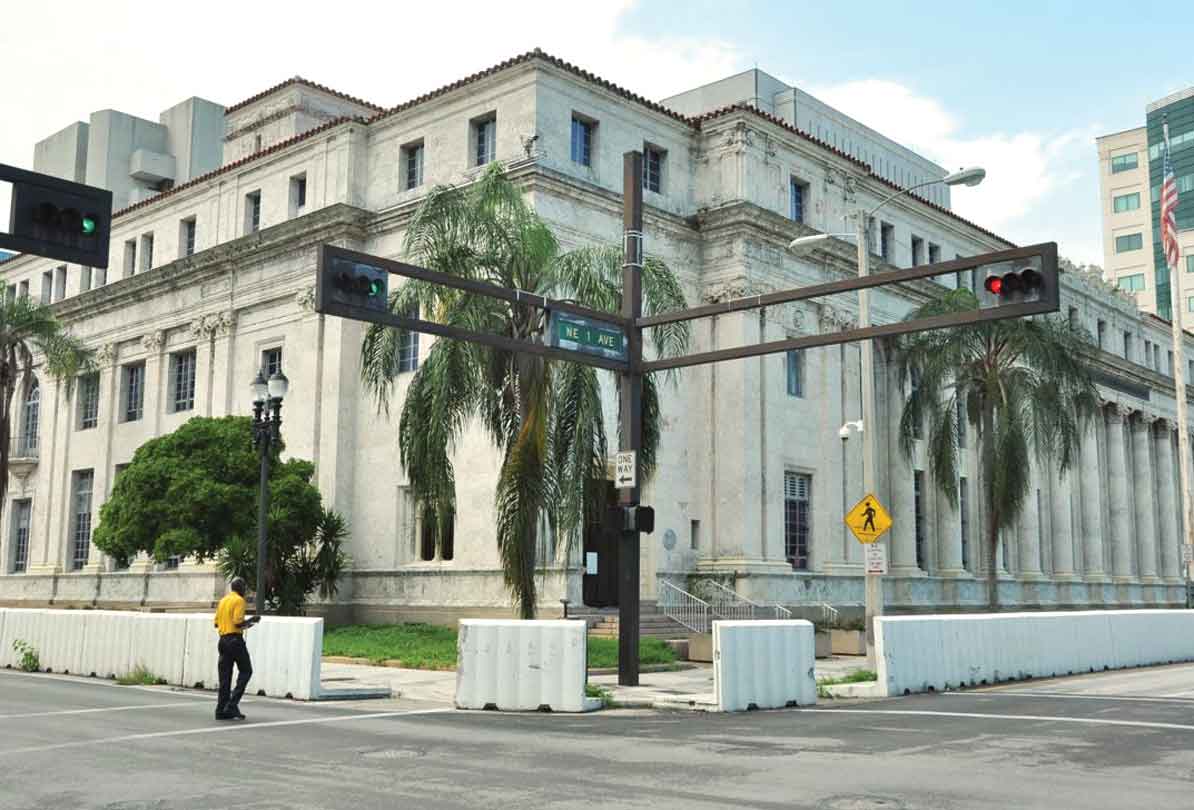 Miami-Dade government staff is looking into whether it can move court operations now housed at the county-owned courthouse to a different facility in Miami.

So far, preliminary findings aren’t promising since staff has pointed out several issues with relocating court operations to the federally owned David W. Dyer Federal Building and US Courthouse, which is now shuttered.

Yet the county isn’t giving up on the proposal and is to continue studying the feasibility.

In a memo to commissioners, Mayor Carlos Gimenez said “the county is open to this and any other alternative that can be used to alleviate the space needs at the courts.”

Commission-approved legislation called for county staff to study whether these operations could be housed at the Dyer Courthouse.

Mayor Gimenez’s memo outlines several issues with that. Among them: The Dyer Courthouse is 166,577 square feet – half the size of what the 11th Circuit Court has said it needs.

Then there’s something else that could be a potential issue – the Dyer Courthouse is listed on the National Register of Historic Places.

“Staff is looking at the implications given that large portions of the building and ancillary features… must be retained,” Mayor Gimenez said in his memo, referring to the historic listing.

National Register historian Jim Gabbert, however, said that a listing on the register doesn’t necessarily prevent a building from being retrofitted or even demolished.

A private owner is free to retrofit his property despite a National Register listing, Mr. Gabbert said. Since the Dyer Courthouse is federally owned, it has an extra layer of protection in terms of the work that could be done on the building.

If the federal government wanted to do structural work on the Dyer Courthouse, it would first have to consult with the Florida Bureau of Historic Preservation as well as with parties that demonstrate interest in the property. Even then, however, the federal government isn’t restricted from proceeding with work the state historic preservation office says would adversely impact the building’s historic character.

The same process would apply to the county or to any other entity that might control the Dyer building the future.

If the federal government decided to turn over the Dyer Courthouse to another entity by either selling or leasing the building, that transfer would come with a restrictive covenant on the courthouse, Mr. Gabbert said. The covenant would obligate the buyer or renter to also consult with the state historic preservation office regarding any retrofitting it wants to do on the property.

“So let’s say the federal government does transfer this building to Miami-Dade for use as an auxiliary courthouse, that transfer would most likely entail restrictive covenants that say, ‘If we give this to you, you must respect the historic character of the building and submit any planned changes to the state historic preservation office,’” Mr. Gabbert said.

Ultimately, if the county or the federal government decides to retrofit the courthouse despite protests from the state historic preservation office, they would do a mitigation of sorts.

“That may be creating an archival record of what was there before it was demolished,” Mr. Gabbert said.

Aside from straightening out issues with the building’s historic designation, Mayor Gimenez’s memo outlines other issues with possibly using the Dyer Courthouse for county court operations.

•The General Services Administration, the federal entity that owns the Dyer building, says $60 million is needed to bring the building up to code and to refurbish it to make it suitable to house modern offices. Miami-Dade staff is validating that figure, Mayor Gimenez said in his memo.

•The Dyer Courthouse is connected underground to the nearby C. Clyde Atkins US Courthouse. The buildings would have to be separated for “security reasons,” according to the mayor’s memo.

•Miami Dade College and the federal government are now concluding negotiations for the school to sign a long-term lease for the Dyer building.

The Dyer Courthouse, which opened in 1933 at 300 NE First Ave., is adjacent to the college’s Wolfson Campus. The three-story Mediterranean Revival building is faced in Keystone, a lithified coral quarried near the Florida Keys.

Mayor Gimenez’s memo outlined just the preliminary findings as to whether 11th Circuit Court operations could be housed at the Dyer building. More information on the feasibility is to become available in the future.

The study is one of numerous avenues the county is looking at to alleviate the space constraints at the existing Miami-Dade County Courthouse.

Last year, county voters rejected a referendum that sought approval for the county to issue $393 million in bonds to finance a new courthouse. Taxpayers would have repaid the bonds. Nearly 64% of those who cast ballots voted against the measure.

5 Responses to Swap one old courthouse for another?