Advertisement
The Newspaper for the Future of Miami
Connect with us:
Front Page » Real Estate » 83-story tower coming out of ground

83-story tower coming out of ground 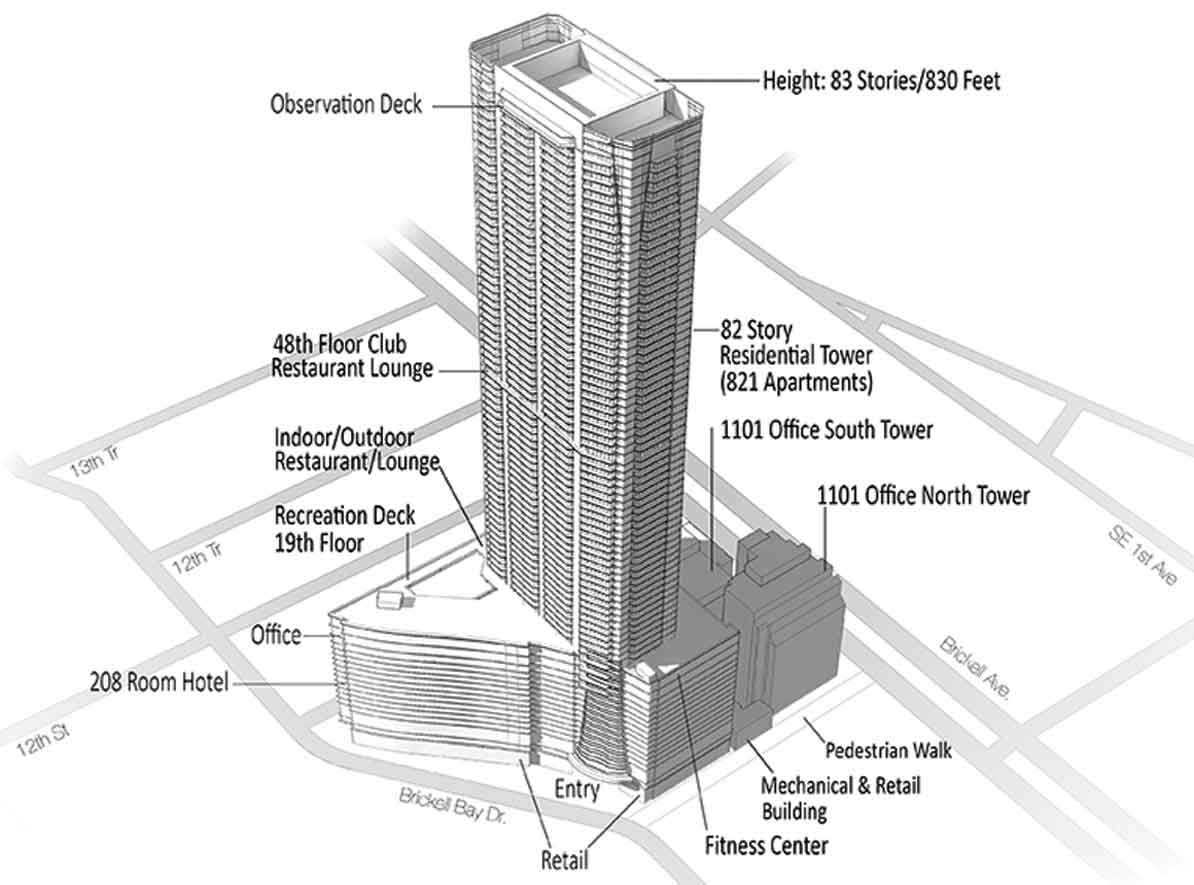 To be the tallest residential building on the East Coast this side of New York, Panorama Tower is to rise 83 stories in the heart of Brickell.

It is a source of pride for developer Tibor Hollo and his Florida East Coast Realty.

On a clear night, those living in the upper levels of Panorama will be able to see the lights of Bimini, according to Dean Warhaft, vice president/development coordinator for the company.

Foundation work began in June 2014. The project is to bring a mix of hotel rooms, luxury apartments, office space and restaurants to Brickell Avenue.

“We will be complete with the foundation and out of the ground late February, early March,” he said. The steel goes skyward at that point.

“What we’ll do, once the foundation is poured, is go immediately to the second and third floor,” he said, noting that it is typical for the first floor to remain open for access while top floors are built and finished. This assists in the location of connections and utilities, he said.

The company anticipates completion around the third quarter of 2017, he said.

“That keeps us three months ahead of the schedule that the city has for the project,” said Mr. Warhaft.

Panorama Tower is expected to cost more than $800 million. The project has the distinction of being the first accepted by the City of Miami EB-5 Regional Center to take advantage of the foreign investment program.

The building’s 19-story pedestal is to include more than 100,000 square feet of medically oriented office space with a teaching facility. Underneath the medical facility is to be a 2,000-car parking garage. Lining the garage to the east on Brickell Bay Drive is to be a 208-room hotel.

Asked what hotel will make its home at Panorama, Mr. Warhaft said he couldn’t reveal the name just yet.

“We are in the final steps of negotiating the lease. It’s gone back and forth and we’re just about ready to have them sign on the dotted line,” he said.

Both the ground floor and second level of the pedestal are to include more than 50,000 square feet of high-end retail outlets and restaurant space.

Directly atop the pedestal will be the recreation deck, which is to offer two social rooms, a cardio room with more than 100 exercise machines, weight room and fitness area, spa and steam room, spinning/training studio, and a serenity pool, recreational pool and lap pool. The pedestal is also to offer interactive water features, sundeck areas and a pool deck restaurant.

Under the recreation deck, the pedestal is also to have a children’s playroom, home theater with seating for 80 people, two interactive cyber rooms, music room, billiard room, wine cellar and a kennel featuring both daycare services and overnight boarding for pets.

Above the pedestal is planned the residential tower, consisting of 64 stories and 821 luxury rental apartments.

The 48th level of the tower is to serve as an intermediate mechanical level in the center portion, while the ends of that floor will be home to one of the most well-known Latin American restaurants/clubs, the company said.

A name for this restaurant has not yet been chosen, said Mr. Warhaft, but he said the food will be Peruvian cuisine.

Having the tallest building in the city is a bragging point, Mr. Warhaft admitted. And while there are other proposed projects shooting for 1,000 feet or higher, “until they break ground, we’ll be the tallest in the skyline,” he said.

The original plan for the tower was a skyscraper reaching 849 feet, he said. The current Federal Aviation Administration approval is for 830 feet, Mr. Warhaft said, “[but] we plan to go back to get the 19 feet back.”

The better to see Bimini with.

One Response to 83-story tower coming out of ground