Advertisement
The Newspaper for the Future of Miami
Connect with us:
Front Page » Top Stories » Miami Circle parking goes round in circles 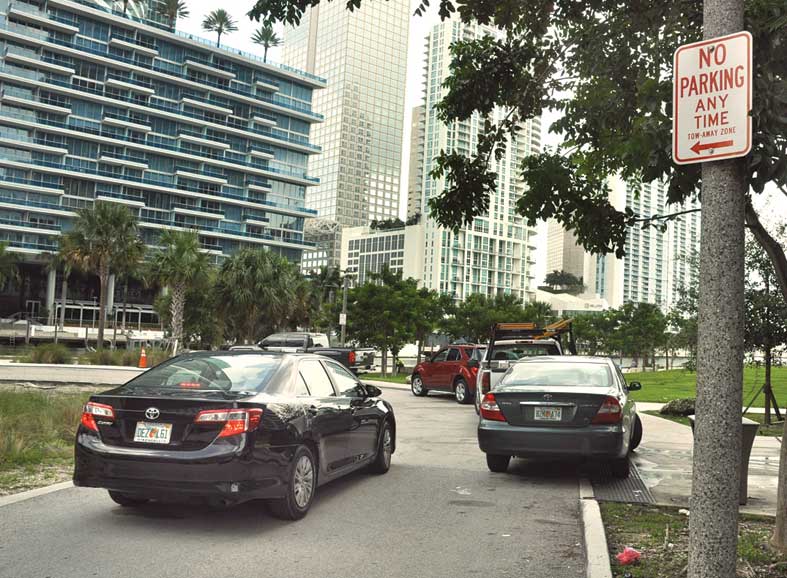 Archaeologist Robert Carr is sending to the state his fifth revision in a year of a study evaluating the 2,000-year-old Native American historical site beside the Miami Circle and outlining procedures to follow should artifacts be found during proposed construction of parking spaces under the Brickell Bridge to open the site to more visitors.

After two years seeking approval to build a parking lot with at least 20 spaces for the Miami Circle, the Miami Parking Authority thought in September that an updated plan its officials sent to the Florida Division of Historical Resources, which coordinates construction projects on state-owned land to identify and protect historic sites, might be the final one. At the time, CEO Art Noriega told Miami Today the parking authority was hoping the state wouldn’t come back with its usual suggested revisions.

In October, Mr. Carr was asked for minor technical revisions and, to comply, added noting the possibility of postholes.

The Miami Circle beneath 401 Brickell Ave. was discovered during an archaeological study conducted after a 1998 demolition to make way for a high-rise condominium.

After the base of a stone circle was discovered, the state bought the site for $26 million in 1999 and eventually construction was started on a $1 million park funded by several state and local organizations.

The Miami Circle is now managed by HistoryMiami, formerly known as the Historical Museum of Southern Florida, but the parking authority would operate the planned parking site.

Mr. Carr said since the authority’s September plan was sent, the state came back with a request for a clear statement of need.

As it relates to the statement of need, these have already been sent by municipal agencies and officials including the Miami River Commission, Miami’s Downtown Development Authority and city Commissioner Marc Sarnoff’s office, said Rolando Tapanes, director of planning and development for Miami Parking Authority.

In a Nov. 15 letter to State Historic Preservation Officer Robert F. Bendus, Executive Director Alyce Robertson said the development authority contributed $25,000 toward the park’s completion and is thus a vested stakeholder in its success.

“The Miami Circle is a tremendous asset to the city as a park and archaeological site,” Ms. Robertson wrote. “Landmarks like Miami Circle are critical mediums for educating residents and visitors about our rich history. They form a link to our past that no museum or book can fully reproduce.”

Unfortunately, Ms. Robertson pointed out, the “somewhat hidden location of the Miami Circle and lack of parking make it difficult to access, thereby limiting its potential as an educational tool.”

She said the development authority is aware of an effort by the Miami Parking Authority (MPA) to provide limited parking and a short riverwalk connection underneath the Brickell Bridge and fully supports the project.

“We understand and respect the need to be sensitive to archaeological materials and are confident that the MPA’s preeminent archaeologist, Bob Carr, will ensure that this is accomplished,” Ms. Robertson wrote. “We respectfully request that any approvals for this project be granted in a timely manner so that many more Miamians and visitors may have the opportunity to experience and enjoy this archaeological treasure.”

“The Division of Historic Resources has not asked for any new information regarding the parking project under Brickell Bridge since we renewed our request for an archaeological evaluation of the area under the bridge this past October,” said Katie Kole, director of marketing, Florida Department of State, in an e-mail Monday. “Due to the involvement of the Federal Highway Administration [FHA] as the owner of the airspace under the bridge, the division is responsible for consulting with FHA [according to the National Historic Preservation Act].”

In order to be compliant with federal requirements of the act, Ms. Kole said, the highway administration and the Miami Parking Authority have to “account for the possibility of an archaeological site under the bridge. This law requires that certain efforts be made to avoid, minimize or mitigate any potential adverse effects to significant historic properties. Our role is to assist them in meeting these requirements.”

Should the recent study be acceptable to the state, the authority can firm up a plan with the Department of Transportation and update the pricing component.

In 2011, the proposed cost to build a 20-space parking lot was $90,000 but the market has changed, Mr. Noriega said this past fall, as construction costs have risen.

One Response to Miami Circle parking goes round in circles