Advertisement
The Newspaper for the Future of Miami
Connect with us:
Front Page » Arts & Culture » Big Art Basel influx on way 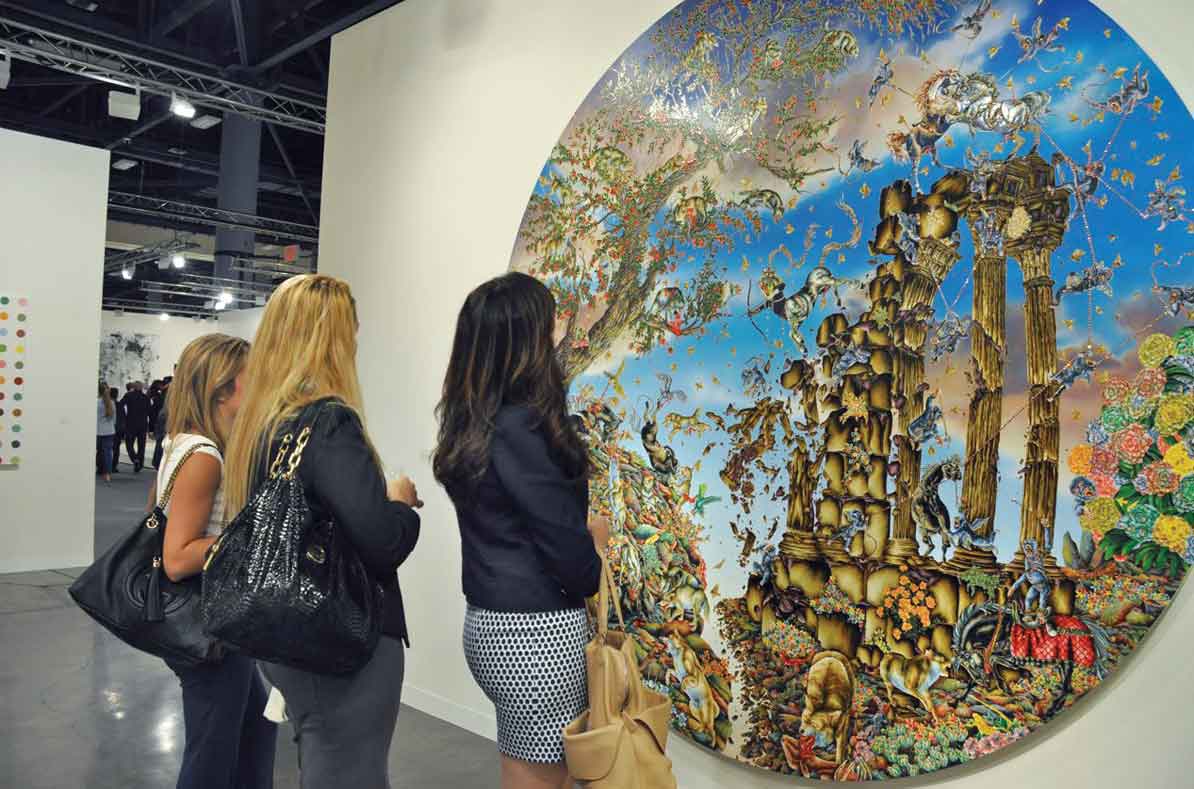 With 267 galleries exhibiting works of more than 400 artists this year, “the fair has grown dramatically over 13 years, as far as participation of galleries, and attendance has increased year after year,” said Robert Goodman, Florida representative for Art Basel Miami Beach.

“There is new art and different modern art each year,” he added. Galleries that want to exhibit go through a rigorous juried selection process in March, and about 800 typically apply, he said.

Though advertising materials typically list Dec. 4-7 as the fair dates, Art Basel actually opens Dec. 3 with a showing to people who have been issued identification cards.

“The card means that they are serious art collectors, or from museums or other institutions,” he explained. The fair is open to the public the next day.

A Friday night art film is shown each year. This year’s selection is “Big Eyes,” by Tim Burton, and it is being shown at the Colony Theater.

The public is also invited to free “art conversations” with experts each morning before the fair opens, and there are also opportunities to hear lectures and roundtable discussions, Mr. Goodman said. A sculpture installation at Collins Park, adjacent to the Bass Museum, is also open to the public.

Because all purchases are private, the show organizers can’t say how much money changes hands, but its economic impact is obvious, he said.

“If you are coming to Art Basel in Miami, you have to ship the art, insure it, have someone who is an art specialist unpack it, set it up in your booth,” he said. “You have to fly staff here, house them in a hotel for five to seven days, feed them. You have all those expenses at end of day, so you have to sell art. We derive our income from the rental of booths, but if they’re coming here, they’re selling art.”

He is a collector of Latin American contemporary art, which will be strongly represented at the fairs. “People see art as an investment, but I don’t think you should see it as an asset class. Buy what you like.”

As far as how this year’s main fair at Miami Beach Convention Center is laid out, “they did a wonderful job,” he said, judging from a map that is posted on the Art Basel website. Four segments that draw the greatest interest have been grouped together, and new and emerging artists have been placed in the main hall, not on the outskirts of the massive convention center. “It’s very clever. You don’t have to leave the main hall. It’s almost like they said, ‘We’re gonna make people stay,’ like Disney and Universal do in Orlando. It’s all there.”

“Art Basel gets bigger and better every single year,” said Louis Wolfson III, a founding partner at affordable housing developers Pinnacle Housing Group and a collector and art enthusiast. “It’s built our reputation, because people are going back home and saying what an unbelievable experience they had.”

Just as the Miami Book Fair International is the leading event of its kind in the US, “I’d say the same is happening to Miami with Art Basel,” Mr. Wolfson said. “Every single person can buy art, be exposed to it, and come to appreciate it,” by visiting the satellite fairs.

“Not only has Art Basel put us on the cultural map, but there’s a wonderful vibe throughout the whole city. That’s what I love: the diversity of the people, the uniqueness of all of us.”