Advertisement
The Newspaper for the Future of Miami
Connect with us:
Front Page » Government » Miami may annex area with 100 multinationals

Miami may annex area with 100 multinationals 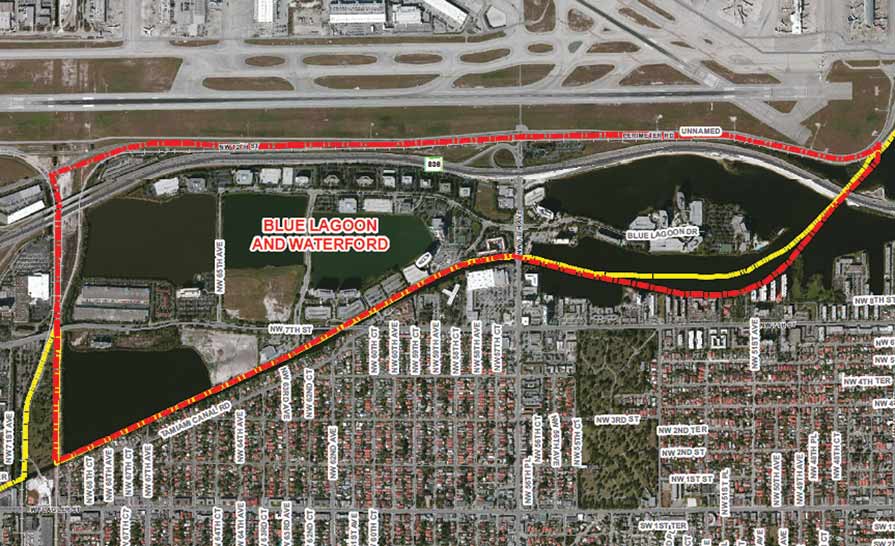 Is the City of Miami preparing to grow?

The possibility of the municipality expanding its boundaries is set for discussion today (11/20) by city commissioners.

In their possession is a recent study on the feasibility of annexing several areas of unincorporated Miami-Dade County, including Blue Lagoon and Waterford, a valuable area adjacent to Miami International Airport that is home to more than 100 multinational companies.

The possibility of Miami annexing unincorporated areas is certainly not new: city leaders have debated the matter for years. For local governments, it’s a way to increase the tax base along with providing public services to a larger area.

The study helps analyze the impact on the city, said Mr. Gort, and looks at potential new revenue from annexed areas, and projected costs to govern and service the areas.

He said the study can help the commission “make sure it makes sense.”

Mr. Gort said city officials have been discussing annexation options with county officials, and he said he doesn’t anticipate any opposition to the possible move.

Mr. Gort said he recalls talking about annexing unincorporated areas when he was on the commission more than a decade ago. It was Mr. Gort who requested an updated study by FIU.

Along with Blue Lagoon and Waterford, the study shows other potential annexation targets as Palmer Lake and Melrose Park, Blue Lagoon West and 36th Street North.

In 2013 there were about 3,328 properties in the proposed annexation communities. The net taxable property value in 2013 was $1.33 billion. Calculations of revenue generated from property taxes included in the study are based on the city’s current millage rate.

Total projected annual revenue from the proposed annexation communities amounted to just under $18 million. It represents anticipated tax revenue of $10.1 million. The total includes franchise and other taxes, licenses and permits, charges for services, fines and more.

The largest amount of new tax revenue would be generated in the Blue Lagoon West and Waterford area, projected at $6.7 million. Melrose Park and Palmer Lake would bring in about $2.9 million in taxes. The 36th Street North community would generate about $396,231 a year in tax revenue, according to the study.

The total operating expenditures for the proposed annexation communities based on per capita calculations for Blue Lagoon West and Waterford are estimated at $6 million a year; for Melrose Park and Palmer Lake at $6.9 million; and for 36th Street North at $536,881, or a total of more than $13.5 million, the study showed.

The largest projected expenditure for adding these areas to the city is almost $7.4 million for public safety.

The Fire Rescue and Police Departments provided estimates for expenditures based on capital cost and staffing calculations to maintain adequate service.

Under community profiles, the study reads: The area surrounding 36th Street north is mainly industrial with commercial areas surrounding the borders of Northwest 36th Street and the City of Miami border to the south. There is a small residential population within the proposed area; there is also a considerable portion of vacant properties along Airport Expressway (SR-112) and Northwest 36th Street.

The area encompassing Palmer Lake has been mainly used for industrial marine uses, aviation- related and commercial purposes along the Miami River and Tamiami Canal. To the west is Miami International Airport. To the northwest is Casino Miami Jai-Alai.

The areas making up Blue Lagoon West and Waterford are centrally located within Miami-Dade County bound by the Palmetto Expressway, Perimeter Road, and bordering the city boundary to the south along Tamiami Canal. The area is also adjacent to the airport, and encompasses about 710 acres, with more than 300 acres of inland water. The area has office, professional, commercial and residential properties.

Also significant are plans for development within Blue Lagoon and Waterford, which include more than 1.5 million square feet of office space to accommodate growing demand from corporations, said the study.

Residential land use along Blue Lagoon West is primarily multi-family, with a high concentration of condominium units along The Palmetto Expressway boundary and Northwest 71st Avenue. There is very little vacant land for redevelopment in Blue Lagoon West, as it is a very established residential community, according to the study.

•Within the proposed annexation area are several marine-related industries – shipping, manufacturing, and boat repair – along the Miami River and Tamiami Canal. These industries rely heavily on the river for access to PortMiami. Operations along the river provide exports to the Caribbean.

•As a result of annexation, the city would assume fiscal responsibility for capital projects in the proposed areas.

•In addition to the capital costs that the city would assume from Miami-Dade County, the city would have additional capital expenditures related to police, fire and solid waste.