Advertisement
The Newspaper for the Future of Miami
Connect with us:
Front Page » Government » Edge tower sells to river’s edge 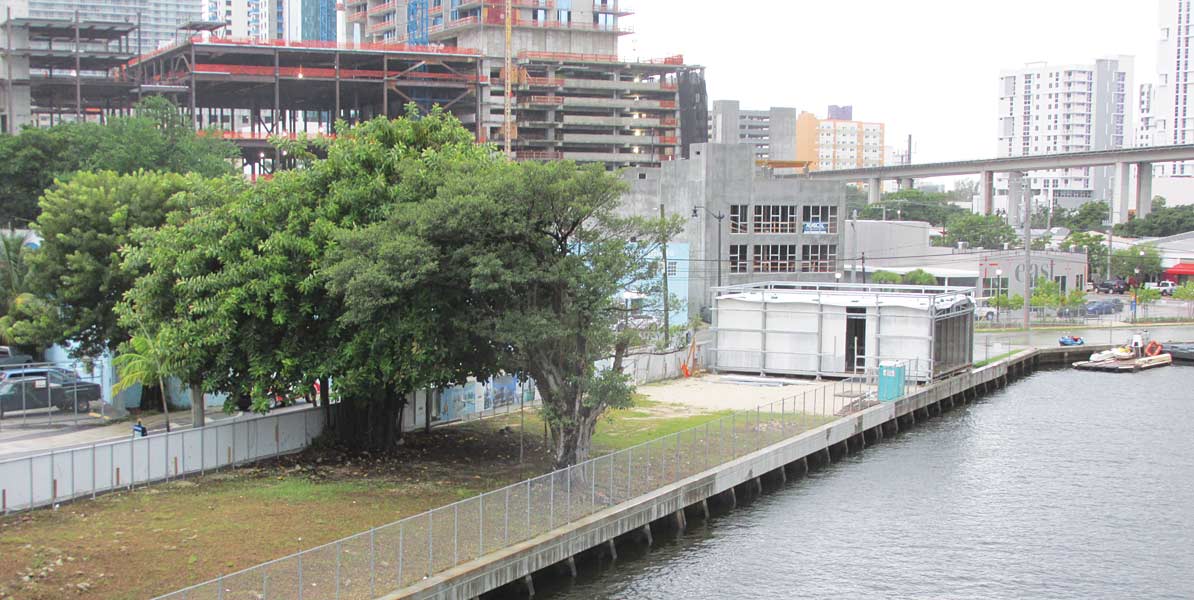 True to its name, the sales office for The Edge on Brickell is being built right to the edge of the Miami River.

Encroachment into an area that must be dedicated for a public riverwalk upset some Miami River Commission officials and resulted in the project coming back before the river commission for another look.

Commission members voted last week to recommend that the Miami City Commission allow the temporary sales office to encroach on setbacks and the river – but only under several conditions designed to ensure public access to the river.

Ultimately, only the city commission can waive waterfront setback rules.

The Edge, a 58-story, 130-unit luxury condo tower being developed by Rafael Aragonés, is to include a multi-level garage with a mechanical parking system, all on a sliver of land just over a third of an acre at 55 SW Miami Avenue Road. This is the site of the former Big Fish restaurant.

The memo notes that on Jan. 13, by a vote of 7-3, the river commission recommended approval of the Edge development, with two conditions.

“Instead of constructing the presented development featuring the publicly accessible riverwalk and waterfront setback as required by the City Charter and Miami 21 Section 3.11 and Appendix B, the developers have begun to construct a ‘Temporary Sales Center’ which has no public riverwalk and no waterfront building setback,” the memo states.

“We believe in the charter and the code,” said Dr. Martin at last week’s meeting.

Ignacio Permuy, representing the developer, stressed that the sales office is temporary.

He said the building will have to be removed before work can begin on the tower, due to the size of the parcel, which is just .34-acre.

“We don’t have the staging area. We can’t build until the temporary sales office is taken out. We cannot build this building with [it there],” Mr. Permuy said.

Construction on the tower won’t start until the developer has sold 70% of the residential units, said Mr. Permuy. The hope is that goal is reached by next June 1, he said.

A temporary use permit the developer got from the city’s Planning and Zoning Department for a temporary “sales center” shows the allowed period from August 2014 through August 2016.

“It’s our opinion that the city’s Planning and Zoning Department erred in authorizing the temporary permit,” Dr. Martin told his fellow commissioners.

After some discussion of the placement of the sales office and the developer’s lack of options due to the small site, the river commission recommended city commission approval, with conditions.

The conditions would allow the temporary sales office for no longer than two years, with no extensions. Also as a condition, the developer would have to make the rest of the riverfront site accessible to the public until construction begins on the tower. If the city commission doesn’t approve of the temporary sales office and its location, it would have to be immediately pulled back 13 feet from the river’s edge or removed entirely.

After the vote, river commissioner Patricia Harris said to Mr. Permuy, “Please be aware: We’re going to watch you.”

The Edge did gain approvals earlier this year but met detractors. Members of the city’s Urban Development Review Board complimented the artistic treatment proposed for the tower, but some complained of the narrow and small site. Others were critical of the proposed mechanical parking system.

At the river commission’s January meeting, three members voted against recommending approval of the Edge. Opponents said the tower isn’t consistent with the Miami River Greenway and is too much for such a small site.

The river commission’s conditional approval then required that the developer remove planned landscaping elements that would cut 3 feet into an existing 8-foot-wide sidewalk, and make changes to ensure the site work doesn’t disturb a section of recently built on-road Miami River Greenway.

That portion of the greenway was built using a $713,756 federal grant. If the development impacts the greenway design, the city might have to return some of those funds.