Advertisement
The Newspaper for the Future of Miami
Connect with us:
Front Page » Business & Finance » Expo center success rides on transit use 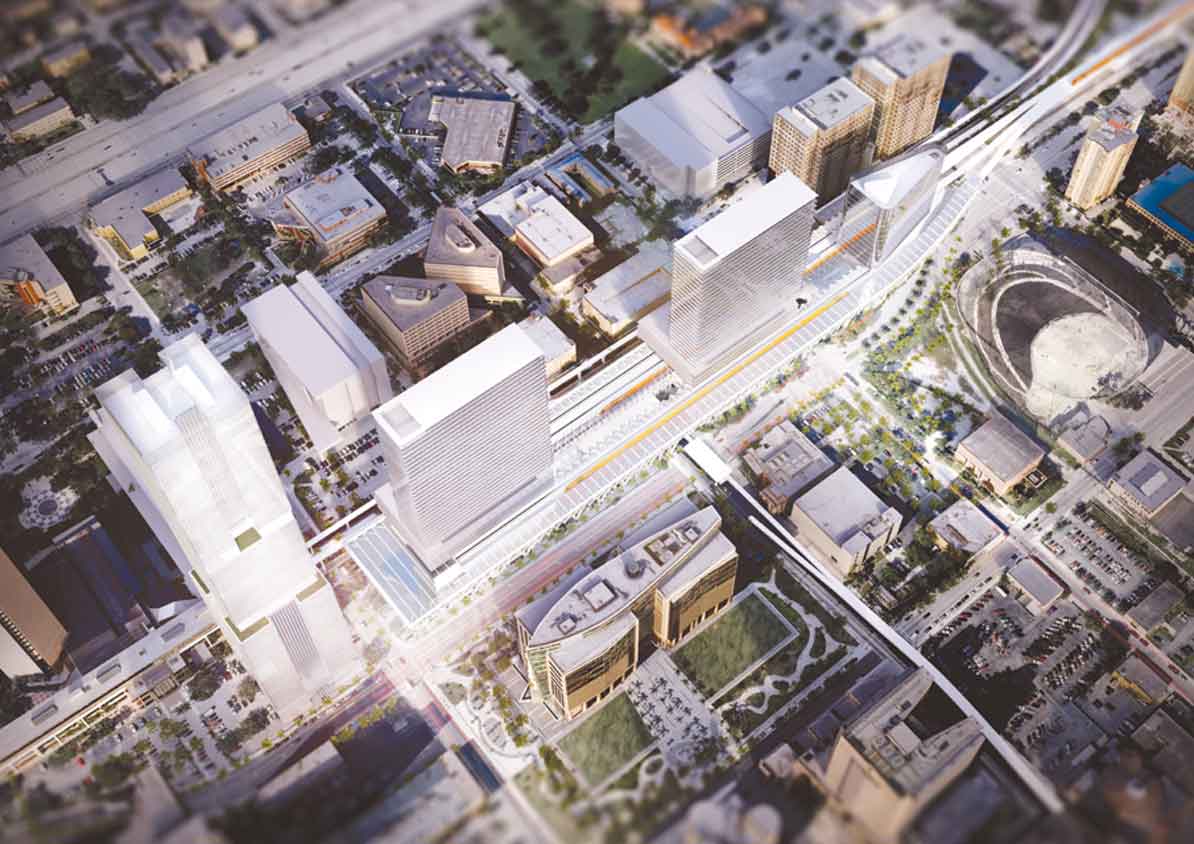 The mass transit system in Miami might not be at the level of other growing cities but one new major project downtown will be relying heavily on that system, say the developers.

The zoning code was recently amended to add design standards for these large developments, and their impact on traffic and transportation is addressed in the language of the resolution.

It is sandwiched between two proposed mega projects: Miami Worldcenter, a plan to redevelop nearly 10 blocks of Park West into a residential and retail neighborhood, and All Aboard Florida with its plans for rapid passenger rail service.

The western boundary of the site abuts the existing Metrorail, and the northern end of All Aboard Florida’s proposed central rail station on Northwest First Avenue between Northwest Sixth and Eighth streets. The expo site is about two blocks from a Metromover station.

Because it’s so near mass transit, the developers are able to request a reduction in the number of parking spaces required for the expo center.

A letter to the city detailing requested waivers says a waiver to reduce required parking by 30% “is justified as a result of the limited space available on the site, the nature of [the] Expo Center’s occupancy, and by the property’s proximity to public transportation. The applicant anticipates that a sizable portion of the [center’s] visitors will be out-of-town guests. Given that many will be visiting for the purpose of attending an onsite convention, only a fraction of those guests will arrive by rental car.

“Given the property’s proximity to the existing Overtown/Area Metrorail Station and the future Miami Station for All Aboard Florida, a sizable number of local and regional visitors to the Expo Center are also likely to forego parking in the building’s garage in favor of public transit,” the letter says.

At recent meetings, representatives of Expo Center developers have noted how perfect the large vacant lot is.

The location next to rail service, and a proposed retail and entertainment venue, is synergy at work, said representative Tony Recio.

Architect Bruce Brosch, of Nichols Brosch Wurst Wolfe & Associates Inc., said the convention center will have easy access from I-95 and I-395 nearby, and “serendipitously for us” the parcel’s next door neighbor is All Aboard Florida.

“We see a seamless connection,” Mr. Brosch told city commissioners last week. The connection made to public transit is a significant component to the project, he said.

“Guests arriving by mass transit will be integral to our success,” he said.

Mr. Recio then spoke of a scenario in which a convention-goer flies into Miami International Airport and instead of renting a car hops on Metrorail and “is in our door within 30 minutes.”

A staff analysis of Miami World Expo Center reads: “The subject property, former site of the Miami Arena, is one of the largest properties in the downtown area that is already configured for major civic use and easily accessible by pedestrian, mass transit, and vehicles due to its wide sidewalks, proximity to a major rail transportation corridor, and proximity to major highways.”

In addition, the analysis notes: “The site is ideal for this type of large scale use because it does not require altering the city grid or network of roads.”

Javier Betancourt, deputy director of the Downtown Development Authority, told commissioners the development authority strongly supports the Expo Center, saying a convention center of this nature has been a top priority of the authority for years.

The Expo Center is expected to support business for all downtown hotels, and create thousands of new jobs, said Mr. Betancourt.

P&G Investors LLC and its related MDM Development Group plan to begin the project this year, with an eye toward a December 2017 opening.

5 Responses to Expo center success rides on transit use