Advertisement
The Newspaper for the Future of Miami
Connect with us:
Front Page » Transportation » I-395 bridge funded for 2018 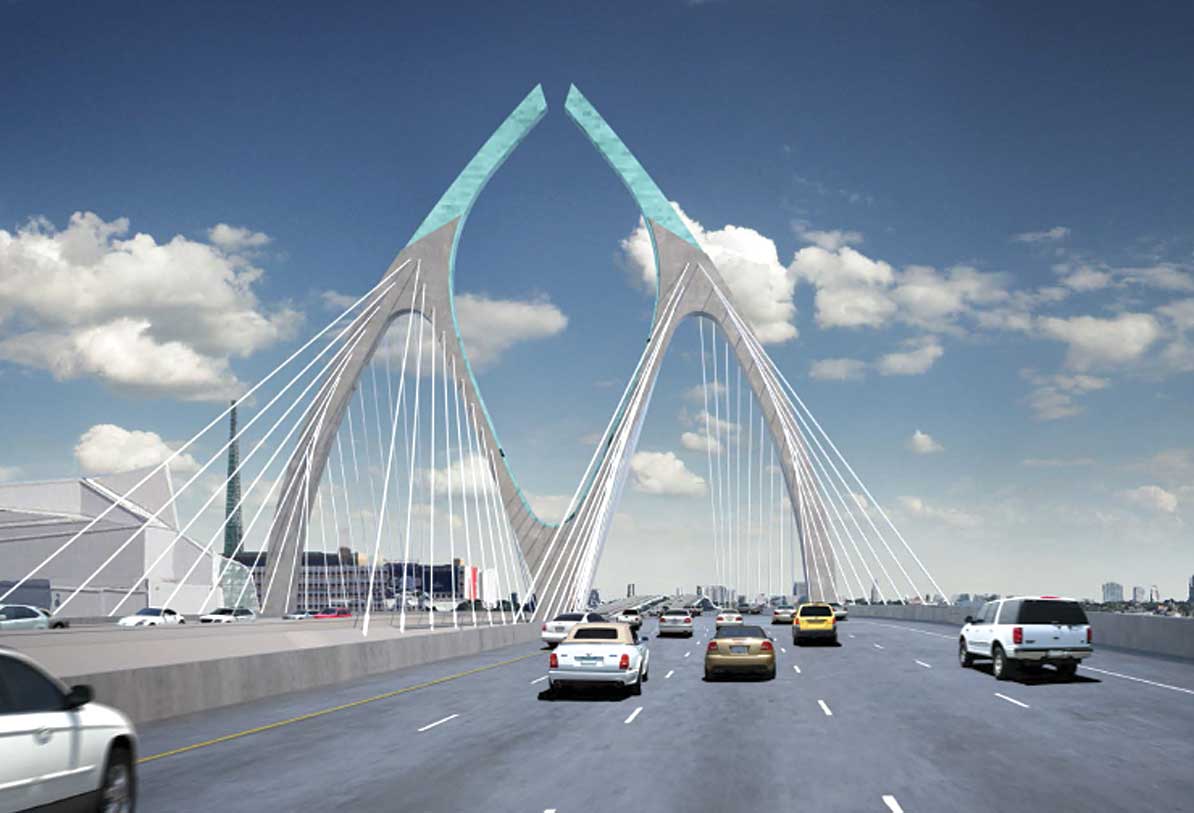 Major improvements to I-395, including a new signature bridge, are funded for 2018 and preliminary design work continues with an eye toward a January 2015 design completion date, according to the Florida Department of Transportation.

In addition, designers and engineers with the state transportation department have narrowed design options for the bridge from four to two alternatives: Lotus and Wishbone.

“The design has not yet been chosen,” said Tasha Cunningham, spokesperson for the transportation department. “The department is working with the Aesthetic Steering Committee. At this time, both the Wishbone and Lotus designs are being considered.”

Twenty years in the making, Miami city leaders had to fight to get the I-395 project back on track. City commissioners in July announced an agreement with the state for reconstruction of Interstate 395 that calls for a new “signature” bridge near the Adrienne Arsht Center for the Performing Arts.

The project has an estimated construction cost of $500 million to $600 million, in present day dollars, depending on selected structural design.

The reconstruction involves some 1.4 miles of roadway.

The project goes far beyond construction of a new bridge, with a goal of opening up the vistas near the arts center and Museum Park. Maps show the roadway improvements occurring in three zones or segments, from where it joins I-95 on the west and the start of the MacArthur Causeway over Biscayne Bay on the east.

“Preliminary design will be complete by January 2015,” said Ms. Cunningham. “Construction is currently funded beginning in 2018 as a Design/Build/Finance project.”

A fact sheet on the project shows proposed improvements include:

Safety and increased capacity are part of the need for the project, state and local officials agree.

Design goals include opening and brightening the environments along city streets that run under the expressway like Biscayne Boulevard, Northwest 13th Street, 14th Street, Northeast First Avenue, North Miami Avenue and others.

Critics of the current low and dense overpass connecting the I-395 lanes to the MacArthur Causeway are plentiful. They argue that the freeway splits the city and that patrons of the arts center at 1300 Biscayne Blvd. are often afraid or intimidated by the low overpass and discouraged to venture southward to the developing area that contains the new waterfront art museum and the city’s new Museum Park.

Earlier this year the transportation department’s Aesthetic Steering Committee reviewed preliminary plans and renderings showing lighted and landscaped areas beneath an improved I-395, with new wide walkways and bike paths.

It is hoped the new bridge won’t shadow the arts center and divide the downtown from Omni, Edgewater and beyond.

The freeway to be rebuilt is part of State Road 836 (SR 836), locally known as the Dolphin Expressway. The portion between I-95 and the causeway is designated as I-395 and takes traffic to and from Watson Island and Miami Beach.

The redesign of I-395 and the bridge have been planned since 1992, but the project was halted in 1994 by the Clinton Administration. Ten years later it seemed back on track, only to fade away again.

In April 2013, Miami Mayor Tomás Regalado and Commissioner Marc Sarnoff filed a lawsuit against the transportation department accusing the state of not following through on a promise to build “a transformative signature bridge” as part of I-395 improvements.

In September 2013 the mayor and Mr. Sarnoff reported that they’d agreed to set aside the suit and negotiate a settlement, and in November Gov. Rick Scott announced an agreement with the city in which the state will put up $600 million to rebuild I-395, including a “signature bridge.”

In July, Miami commissioners approved a roadway transfer agreement and easements with the state to accommodate the rebuilding of I-395, including “a new, visually appealing signature bridge with higher structures.”