Advertisement
The Newspaper for the Future of Miami
Connect with us:
Front Page » Government » 4 towers on river seek double density 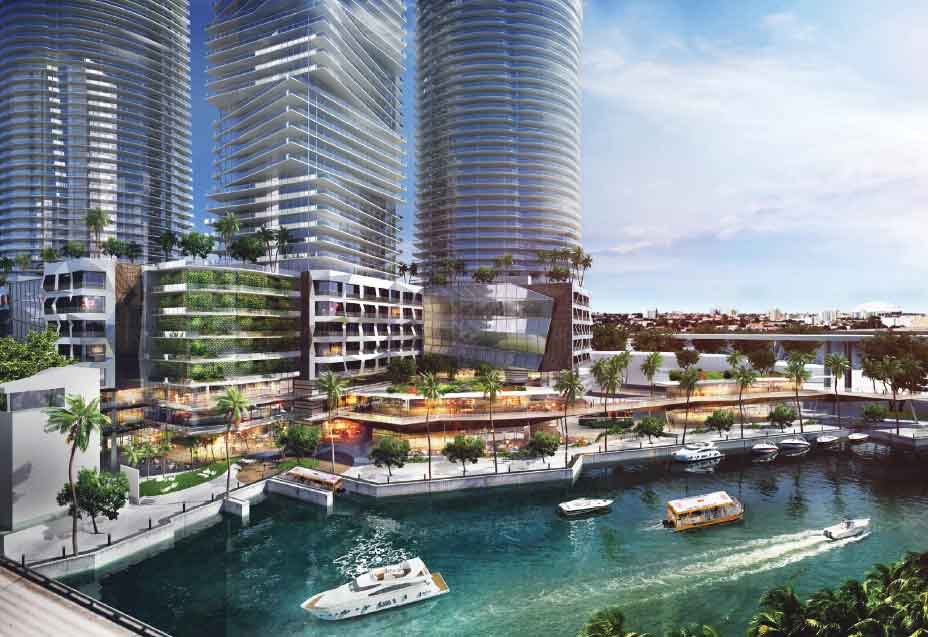 A vast mixed-use development planned on the Miami River in the shadow of I-95 won a recommendation Monday from the Miami River Commission as the developer seeks double the density allowed under current zoning.

This project was earlier referred to as Miami Riverwalk, but the developer has now adopted the name of the body of water it embraces and vows to celebrate: Miami River.

At completion of all five phases, Miami River would include 1,678 residences, 330 hotel rooms, retail and office space, a new seawall with 19 boat slips, and a public landscaped riverwalk the length of the property, stretching from under the Second Avenue Bridge on the east to the northwest corner of Jose Marti Park.

To get the added density, the developer is seeking a Special Area Plan designation under Miami 21, the zoning code. It is in effect a rezoning, and the city commission determines approval.

The purpose of a Special Area Plan is to allow sites greater than 9 abutting acres to be master planned to allow greater integration of public and private improvements and infrastructure.

In order to make the 9-acre minimum, the developer and city plan a public-private partnership that would include a portion of adjacent Marti Park. As owner of the park, the city is a co-applicant for the Special Area Plan.

“We are very excited about this partnership,” Parks Director Stan Motley told the river commission. He said he hopes the development and the riverwalk leading straight into Marti Park will give the park “the publicity we’ve hoped for” and encourage more people to use the park.

Mr. Motley said the riverwalk will bring “a sense of community” to the area.

In consideration for increased density and other items, the developer plans $22 million in improvements or cash payments as a public benefit portion of the project.

River commission members had mostly positive comments about the project, but many expressed a strong desire to see the riverwalk built right away. As now proposed, the riverwalk is in phase two.

The river commission voted to urge the city commission to approve the Special Area Plan, with three conditions: make certain the $22 million in public benefit results in improvements within the river district; have the developer agree to build and improve the riverwalk easterly under the Second Avenue Bridge if Latitude on the River fails to do so; and have the developer, as part of phase one, commit $5.5 million to be held in trust to ensure construction of the riverwalk.

The only no vote came from Sallye Jude, who said she worked in that neighborhood for more than 25 years and remembers when it was home to small streets and houses. She said the four 60-story towers are “so out of line it’s hard to believe.”