Advertisement
The Newspaper for the Future of Miami
Connect with us:
Front Page » Business & Finance » Downtown expo center work set to begin 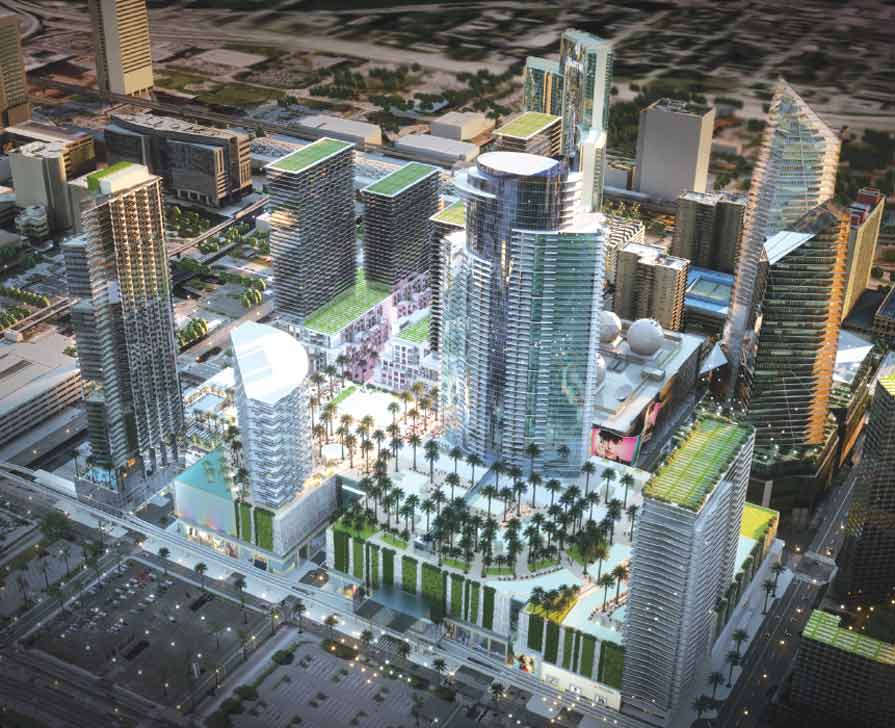 MDM Development Group plans to have shovels in the ground by year’s end to begin giving new life to the old Miami Arena site at 700 N Miami Ave.

The now-barren parcel would become home to a sprawling convention center and hotel – Miami World Expo Center – with developers shooting for a December 2017 completion.

The city’s Urban Development Review Board granted several waivers last week to allow the expo center and hotel to move forward. On Sept. 11 the city commission gave preliminary approval to new zoning language devoted to large projects of this nature.

The developer had requested several exceptions including a smaller setback of just 10 feet along Northwest First Avenue, lot coverage over the allowed 80% up to 90%, and a 25% reduction in required parking spaces.

The land is hugged by two major proposed developments: All Aboard Florida’s rail station on the west and Miami Worldcenter on the east.

“This building and project are unlike any other,” Tony Recio, an attorney for MDM, told the review board.

Everything is designed around the development’s centerpiece: a 100,000-square-foot first-floor open space with a 40-foot ceiling. It will include a fully integrated 1,800-room Marriott hotel.

The complete expo center plan will go before the Planning and Zoning Board of Appeals in early October and before city commissioners in mid October, he said.

“We have worked with the planning staff, and the city, for a long time to deliver this dream,” Mr. Recio said.

“It catapults us into the international convention business,” he said. “And we contribute to Miami Worldcenter.”

Mr. Reyes took the review board through a PowerPoint illustrating how designers worked to create a complex layering of uses, space, amenities and more, and fitting it all into an area that’s roughly two city blocks.

Looking westward from Miami Worldcenter’s property, the completed expo center and hotel will have as its eastern base a 129-foot-tall glass wall, which will allow natural light into the convention center, said Mr. Reyes. It will also allow light to bathe the 60,000-square-foot grand ballroom.

On the very top is a pool deck, described by Mr. Reyes as grandiose and tropical, with a restaurant and outdoor seating.

Hugging the northwest section of the expo center is the hotel – four curved glass towers of varying heights, the tallest about 635 feet.

“This is unique to Miami… it won’t happen twice,” Mr. Reyes said. “Simply, it is a once-in-a-lifetime project.”

Board member Neil Hall said he was extremely excited by what the expo center proposes.

“It’s a big deal for Miami,” he said, and has the potential to transform the neighboring Overtown area as well.

Approval from the review board was conditioned on the developer improving the design and articulation of the rooftop pool, and providing a more detailed landscaping plan.

One Response to Downtown expo center work set to begin