Advertisement
The Newspaper for the Future of Miami
Connect with us:
Front Page » Real Estate » Real estate bubble worries deflated 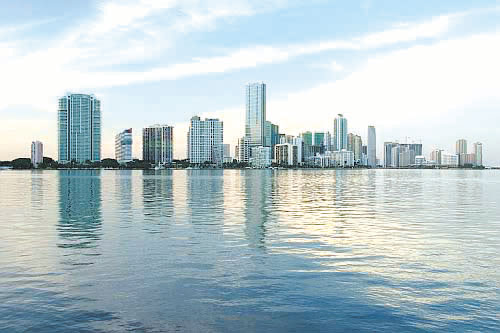 Industry experts agree that with markets moving as rapidly as they are in South Florida, it’s only natural for people to ask if we’re in the midst of a land price bubble.

The market is definitely moving into new, unchartered borders with prices at, or above, an all-time high, but CBRE Managing Director Ken Krasnow looks at this trend more positively than negatively for the long run.

“Miami is moving into a new dynamic, and historical perspectives will be non-relevant moving into a new paradigm,” he said. “The scarcity of product and increase in demand is driving prices up, with strong demand factors converging.”

Mr. Krasnow said he often refers to what happened to New York City 20 years ago as an analogy to what’s occurring in Miami. After officials worked on mitigating crime and blights on the landscape, he said, demand felt comfortable and secure. “The land supply was limited, constrained on the island and demand kept coming.”

Similarly, there’s demand coming to Miami, and it isn’t just for the beaches or our good weather, Mr. Krasnow said. Rather, he said, the demand drivers deal with infrastructure, trade, tourism, increased shipping capacity and growing fields such as health care, financial services, legal and pure technology fueled by the Internet.

The investors and buyers Miami is seeing are not people who will “hit and run” but those who are prepared and able to withstand any “bumps” in the market, Mr. Krasnow said.

“We have a new breed of investor who looks at the demand drivers,” he said. “There’s a deep demand pool out there.”

When a 1.25-acre property sells for $125 million, people are sure to start asking questions about a land price bubble, said Ron Shuffield, president and CEO of EWM in reference to the mostly vacant site along Biscayne Bay in downtown Miami purchased this summer by a group that owns a large grocery store and beef chain in Argentina.

It’s important to remember that it’s not so much the size of land but what can be built on it that justifies price, Mr. Shuffield said.

He said he isn’t alarmed about the increase in land prices, primarily because properties are being built by investors who are accepting a lower rate of return, which means they are “in it for the long term” and can wait for investment adjustments.

“A bubble is created when there’s too much supply and not enough demand,” Mr. Shuffield said, pointing to the situation in Miami being the opposite. He said the population growth alone necessitates demand for retail, residential and office buildings. “Florida added 250,000 new net permanent residents last year, and we also have frequent visitors who spend money here,” Mr. Shuffield said.

With the population growing across the state, land prices in the more desirable areas of Miami-Dade will rise at a faster rate, he said, adding that not all land is rising at the same rate.

There has been a huge swing of land prices over the years with the market rebounding strongly, Mr. Shuffield said.

“There’s a limit to what developers can justify spending for land, but as long as demand remains strong and the end-product value continues, they can spend a bit more,” Mr. Shuffield said.

“Builders and developers have a certain percentage they can spend for land,” Mr. Shuffield said. “If the end product goes up 55%, they can afford to spend more for land.”

A balanced residential market is between six and nine months of remaining inventory, and that’s what it is now, he said. “We have enough new supply in the condo market but are seeing increased demand for single-family homes.”

Not everyone is sanguine about the rising cost of land, however. Demand will remain high for at least a few years, mainly because of population growth, but the trend will not last forever, said Jack McCabe, real estate analyst and CEO of McCabe Research & Consulting.

In fact, he is concerned about a global recession in 2017 if not before and worries that people have short memories of what Miami – along with the rest of the country – went through not that long ago.

“There’s a belief that what’s happening now will always go on, but it’s been less than a decade since we saw the largest drop in land prices, led by residential, since the Great Depression,” Mr. McCabe said. “Developers target land costs to range from 8% to 22% of the finished product. If a parcel of land that’s just a little larger than one acre is selling for $125 million, how many units would the developer have to build – and charge per unit – to make the numbers work?”

There are several questions for which we don’t have the answers, he said. “Will we continue to see the population growth?” he asked. “Florida, of all the US states, will see increased demand for housing because of population growth, but for how long?”

Moreover, Mr. McCabe said, flight capital from Latin America is inflating land and residential prices. “It doesn’t matter to many people fleeing distressed counties how much they pay because they just need to get their capital out of some of these countries,” he said. “Will this flight capital continue to come to Miami? We don’t know.”

“This is a very abnormal market,” he said, “propped up by flight capital.”