Advertisement
The Newspaper for the Future of Miami
Connect with us:
Front Page » Communities » 10-mile linear park gets new look 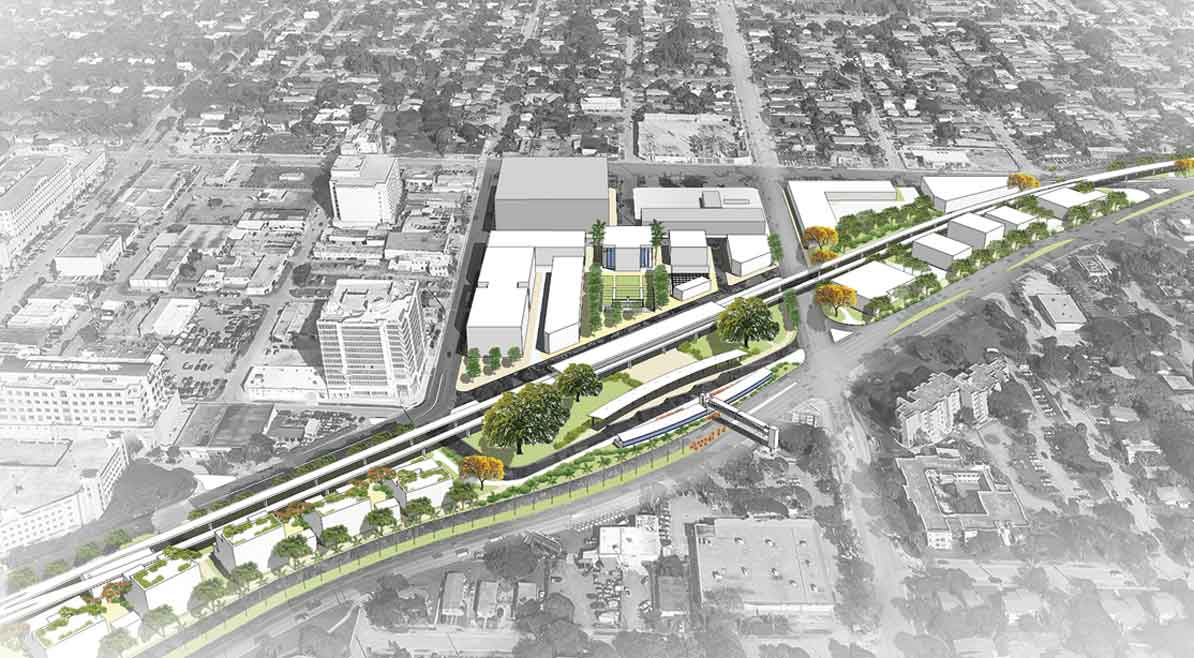 GreenLink, a plan to create a 10-mile linear park along the southern Metrorail route, is gaining attention and support and moving ahead with the help of the University of Miami.

This fall, UM students will be launching an economic impact study tied to the GreenLink proposal, according to Friends of the GreenLink.

The proposed renovation of the M-Path for bicycles and pedestrians along US 1, GreenLink is being promoted by various county agencies, including the Miami-Dade County parks and transit departments. The idea to use the underutilized land came from Friends of the GreenLink founder Meg Daly.

The economic impact study comes on the heels of a spring 2014 studio class at the School of Architecture, where students studied the rail route’s existing conditions and created renderings of what could be.

Spearheaded by a powerful coalition of Miami-Dade County’s Department of Economic Resources, University of Miami School of Business Administration and location analytics company Urban4M, UM students will work under the supervision of UM Finance Professor Andrea Heuson to analyze economic growth opportunities along the GreenLink’s 10 miles from Brickell to Dadeland South stations.

“The economic impact of urban green spaces and bike and walking trails is documented. But the GreenLink’s impact on Miami’s southern corridor will be transformational. Our students will participate in a change-making initiative for the community,” said Ms. Heuson.

“We’re looking forward to providing actionable recommendations on GreenLink planning and implementation to achieve the highest possible economic returns,” said Hillit Meidar-Alfi, Urban4M founder and president. “Our software tools are visually driven and can be used by planners, designers and sponsors alike.”

The primary goal of the impact study is to provide implementation and design recommendations to attract “green-space-friendly” commercial development.

It’s no surprise that GreenLink supporters are following in the footsteps of other metro greenway projects that have met with great success, according to Maria Nardi, the head of planning for Miami-Dade County Parks & Recreation.

“Other linear park initiatives like New York City’s High Line and Atlanta’s Beltline commissioned economic studies. To do the best job for our community, we’re following the best practices of other successful projects like these,” Ms. Nardi said.

The current plan is to publish the economic study results in early 2015.

Taking her proposal on the road throughout the year, Ms. Daly said she wants the friends group to be a catalyst for a world-class linear park and trail.

That starts with the ambitious goal of creating a 10-mile trail and linear park, then finding other connections in the community to link into a network of greenways throughout the city, she said.

Several municipalities have endorsed the proposal including the City of Miami, the City of Coral Gables, the City of South Miami and the Village of Pinecrest.

When the Miami City Commission adopted a resolution supportive of GreenLink in May, it noted the benefits to be realized by the project, and that similar initiatives such as the High Line in New York City saw property values adjacent to the once-abandoned trail greatly increased.

Land contiguous to the Metrorail is of lesser value than properties just two blocks off the rail line, said the resolution, “and introduction of a linear park greatly improves the value of contiguous and adjacent properties.”

The committee recommends the full county commission direct the mayor’s office to prepare a report containing a possible implementation plan for “creation of a ten-mile linear park along the Metrorail corridor consistent with the GreenLink proposal.”

A draft of the resolution indicates the full commission will consider it Oct. 7. If approved as written, it would give the mayor’s office 60 days to complete the study, and asks that it “detail how this GreenLink project can be realized, the cost, available funding sources, and a timeline for construction.”

Prime sponsor of the measure is Commissioner Jose “Pepe” Diaz.

The proposed resolution states the county supports the goals of GreenLink, in that it promotes health and social welfare by providing additional and enhanced recreation and transportation options to residents and visitors.

GreenLink would also provide for widened, straightened paths, improved crosswalks and transformation of the existing M-Path into a “world-class park space providing recreation options in the heart of the urban core,” says the resolution.

Friends of the GreenLink is a non-profit with 501 (c)(3) status. The members share the common goal “of making our community more connected, beautiful, and healthy, while responsibly growing its future economic base.”

The friends group says its members include leaders in the county parks and transit departments, architects and urban planners, biking advocates, public relations and marketing experts, professionals in the legal and accounting fields, real estate developers and others.

The group said it is seeking funding from both the public and private sectors. Eventually the group hopes to create an endowment for ongoing maintenance and programming of the GreenLink.