Advertisement
The Newspaper for the Future of Miami
Connect with us:
Front Page » Transportation » Swire work closing Metromover stop for year 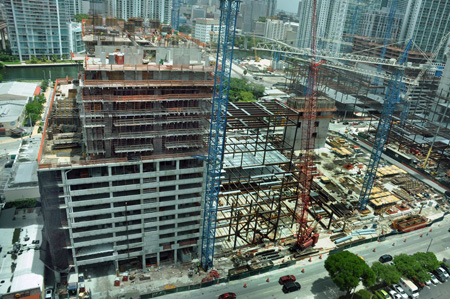 Say goodbye to the Eighth Street Metromover station on Friday.

The commuter rail station will close until next summer to undergo $4.6 million in improvements as part of Swire Properties Inc.’s Brickell City Centre project.

The facility will be integrated into Swire’s giant mixed-use complex, featuring the addition of another level at the station that will have direct access to a hotel lobby at City Centre, county staffers familiar with the project told Miami Today Tuesday.

Miami-Dade County Transit, which operates the Metromover system, is coordinating the station project with Swire, but it is essentially a Swire job. The real estate development giant is paying for the project and hiring the contractors, county staffers said.

Used by nearly 1,200 passengers a day, the Eighth Street station is slated to begin undergoing reconstruction Saturday. The first phase of City Centre is directly west of the station.

During the work, Metromover trains will bypass the station, but will continue serving all other stops on the system’s Brickell Loop. While the station is closed, passengers can use two other nearby stops: the Fifth Street station to the north and the 10th Street Promenade station to the south.

The Eighth Street station project will upgrade access to the passenger platform from the ground with a new elevator, a new escalator, new stairs on the north side of the station, and a new third level that will lead to City Centre’s hotel.

Also, staffers said, the work will involve erecting new columns at the station, enlarging the station’s footprint, putting up a new canopy covering the third level, and making security improvements. When complete, the station will have a larger passenger capacity.

Officials did not have a specific date for the station’s reopening.

The station is at the eastern end of the City Centre site, which covers more than nine acres, starting about a block west of Brickell Avenue. The first parts of the $1 billion-plus City Centre are scheduled for completion next year. The area east of the Metromover, which is to include an 80-story mixed-use tower, is to come later.

Billed by Swire as “anticipated to bring a whole new level of urban living and sophistication to the area,” the complex is to feature 5.4 million square feet of office, residential, hotel, retail and entertainment space, in addition to a two-level underground parking garage.

Later phases planned for City Centre will expand the project’s footprint with more housing and retail space to the north of the first phase, as well as the office and residential tower fronting Brickell Avenue on the east side of the Eighth Street Metromover station.

A spokesman said Swire officials were not available  for comment.