Advertisement
The Newspaper for the Future of Miami
Connect with us:
Front Page » Latest News » Grove towers to add almost 400 condos 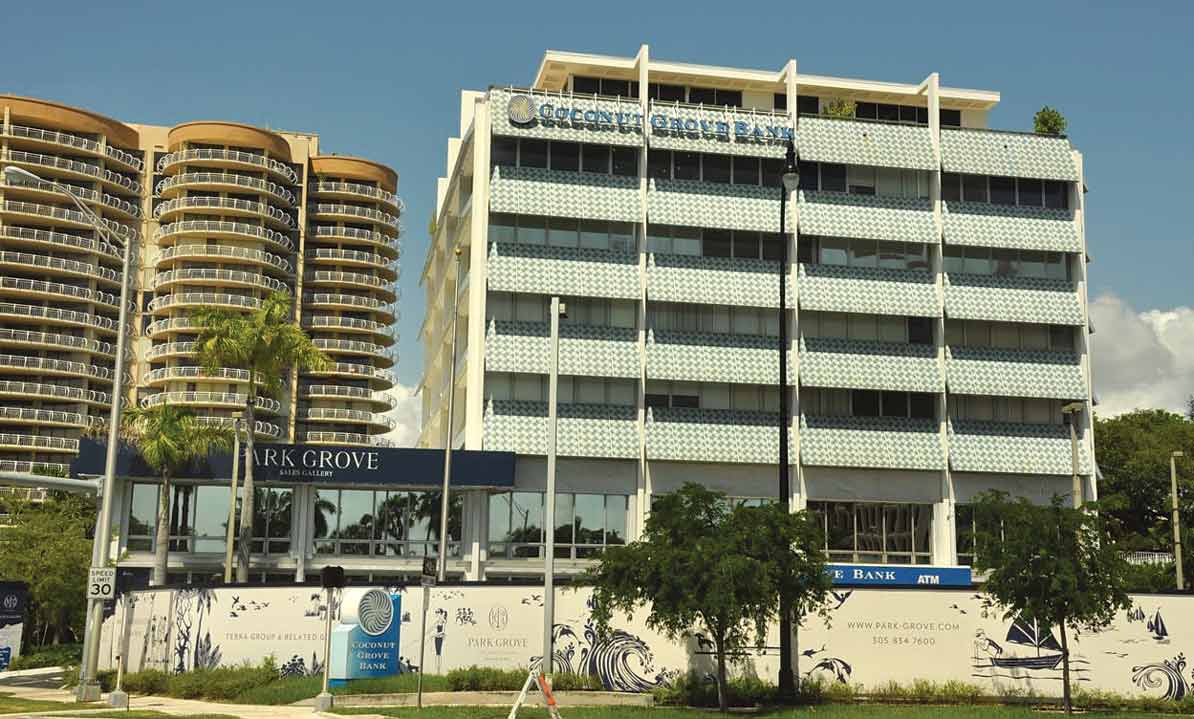 More than any other development firm, Terra Group is having a major impact on the face of Coconut Grove’s famous waterfront.

And that’s fitting because after all, Terra Group’s home is Coconut Grove.

Two major residential developments coming to life under the Terra Group name along South Bayshore Drive will bring nearly 400 new residences to the Grove in the next few years.

Grove at Grand Bay, two luxury residential towers, are already poking the sky and pulling in buyers, and just down the street Terra Group has opened the sales office for Park Grove, a mixed-use development that will rise where Coconut Grove Bank stands today.

When all is said and done, the two developments will add 394 dwellings to the neighborhood – 96 at Grove at Grand Bay and 298 at three towers making up Park Grove.

Construction on Grove at Grand Bay began in earnest in 2013, and this summer observers have begun to notice the ‘twist’ taking shape in the dual towers. The glass and steel floors are designed so that the finished product will look as if the buildings themselves are twisting toward the sky.

The two condominium towers are being built on the site of the old Grand Bay Hotel, just across from Pan American Drive and the entrance to Miami City Hall.

Construction on Park Grove is expected to begin in early 2015, according to David Martin, Terra Group’s chief operating officer. For this project, Terra has teamed up with another major player in South Florida’s growth, The Related Group.

The key word for these projects is BIG.

How big? How about 12-foot ceilings.

Everything about these two developments is big, right down to big name architectural firms with international reputations brought in to work their magic on site designs.

And consider this: The acronym used by the architectural firm that designed Grove at Grand Bay is BIG, also known as Bjarke Ingels Group.

Under the direction of Danish architect Bjarke Ingels, BIG is a group of architects, designers and innovators working in architecture, urbanism, research and development. To complement Bjarke’s vision, Grove at Grand Bay chose Raymond Jungles as lead landscape architect.

Mr. Jungles said he focused his Grove at Grand Bay design on exploration of the relationship between the natural and built environment. Through his approach to landscape architecture as an art form applied through principles of ecology, botany, architecture, culture and art, Mr. Jungles was able to craft a unique and botanically-rich landscape, said Terra Group.

Other amenities include three pools, an art gallery and private two-car garages.

Park Grove will bring a new and smaller office building for Coconut Grove Bank, which has made the corner of South Bayshore Drive and Southwest 27th Avenue its home for many years.

Overall the project includes three residential towers, the bank, and a multi-level clubhouse with public amenities. Two of the towers will offer “luxurious” residences, while the third is to have less high-end units.

Terra says the project will come together via “a design-driven residential master plan.”

Shohei Shigematsu, an architect and a partner with Mr. Koolhaus’ Office for Metropolitan Architecture, said the design team took into account the distinct neighborhood, tapping into its sense of community.

The buildings will have recessed lobbies, with exterior-like gardens all around – a buffer of nature, he said.

The clubhouse will offer a library, gallery, spa, fitness center and dining. A public walkway will also be built along the site’s southern edge.