Advertisement
The Newspaper for the Future of Miami
Connect with us:
Front Page » Real Estate » Four 60-story riverfront towers unveiled

Written by John Charles Robbins on May 21, 2014
Advertisement 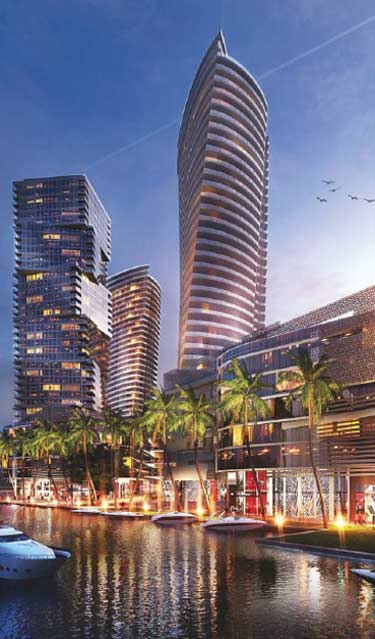 In the shadow of I-95, a developer plans to build four 60-story towers on the Miami River to include a marina, hotel and 1,449 condo units.

The ambitious plan was reviewed May 14 by the Urban Infill & Greenways Subcommittee of the Miami River Commission.

Miami Riverwalk’s towers would cluster the condos and 300 hotel rooms on about 6.5 acres. The plan also calls for retail and office uses, a riverfront restaurant, public riverwalk and other dedicated green space, a small marina and parking garages.

The project is planned for a three-block area bordered by the river, Southwest Seventh Street, Southwest Third Avenue and Southwest Second Avenue.

Committee Chairman Jim Murley was pleased by the presentation on the project, including several renderings of the planned towers, but said he didn’t feel the time was right for an advisory vote to the full river commission.

The developer, New York-based Chetrit Group, had just hired a landscape architect and a firm to evaluate the need for a new seawall, so there was design work yet to be done, the committee learned.

The committee may review a more detailed plan in late June, with a river commission review possible July 7.

The project would displace four operating businesses, including Finnegan’s River, a bar and restaurant.

According to the presentation, the developer intends to seek a Special Area Plan designation under the city’s zoning ordinance, Miami 21. It is a rezoning, and approval is determined by the city commission.

The purpose of a Special Area Plan is to allow sites greater than 9 abutting acres to be master planned to allow greater integration of public and private improvements and infrastructure “and greater flexibility so as to result in higher or specialized quality building and streetscape design within the Special Area Plan,” says Miami 21.

In order to make the 9-acre minimum, the developer would add all or part of adjacent Jose Marti Park, a city-owned recreational area that includes a ball diamond. As owner of the park, the city would be a co-applicant for the Special Area Plan designation, according to the presentation.