Advertisement
The Newspaper for the Future of Miami
Connect with us:
Front Page » Business & Finance » Railroad to take the high road

Railroad to take the high road

Written by Lidia Dinkova on May 7, 2014
Advertisement 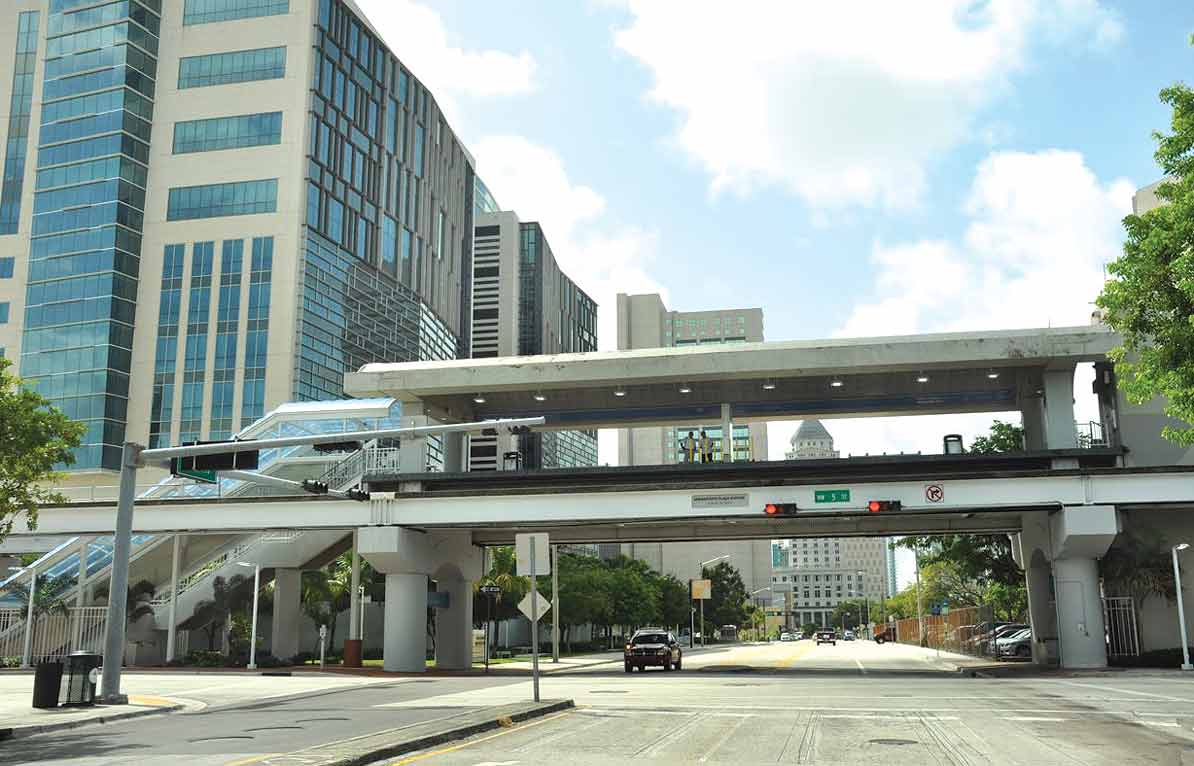 What are now mainly parking lots might turn into a bustling downtown Miami train station complete with retail, offices, residences and a hotel.

All Aboard Florida, a subsidiary of Coral Gables-based Florida East Coast Industries LLC, plans to build the southernmost station for its Orlando-Miami express rail line within a linear chunk of land linking Northwest First and Eighth streets along Northwest First Avenue near county hall.

While All Aboard Florida hasn’t released official plans for its downtown Miami station, proposals in an environmental assessment show what could be.

The preferred station location – the option recommended for further study – calls for an about 45-foot viaduct that would run along the existing Metrorail and take passengers not only over Northeast Eighth and Sixth streets but also over the existing Metromover tracks along Northeast Fifth Street.

The line would pass at street level underneath the Dolphin Expressway and then begin the incline onto the viaduct. Northwest Eleventh and Tenth streets would be blocked to allow for the train’s escalation, records show.

The street closures would affect “local streets rather than a major state or federal thoroughfare,” and alternate routes are nearby, according to the environmental assessment.

The already-in-use freight train service would peel away onto existing tracks at Northeast Eighth Street and head toward PortMiami with the viaduct located more than 23 feet above.

This option calls for the station’s 1,000-foot-long platform, where the sets of tracks would expand from two to four, to be between Northeast Seventh and Fourth streets.

The station’s primary entry would be at Northwest First Street and “a three- to four-story liner of passenger-oriented functions and retail would create a continuous street wall extending to the north,” according to the environmental assessment.

“I can tell you the station will be elevated about 55 feet, allowing for continued vehicular and pedestrian flow to occur on the ground level,” Mike Reininger, All Aboard Florida president and chief operating officer, told Miami Today in an email.

The elevated option is preferable, according to the environmental assessment, because the viaduct would eliminate the need for traffic to cross over tracks at Northeast Sixth and Fifth streets, and going above the Metromover would avoid costly tampering with existing transit structures.

“Elevation, from a customer perspective, could provide passengers with an unparalleled panoramic entry into the city,” according to the environmental document.

Another station alternative, one that wasn’t picked as the preferred option, considered in the environmental assessment calls for the tracks to remain at street level and cross underneath the Northeast Fifth Street Metromover. The 1,000-foot-long platform would have been between Northeast Fifth and Third streets, which would have shuttered Third Street.

That closure, according to the study, would have resulted in “dead-end conditions from both directions.”

“In addition to the station, we are planning 3.5 million square feet of transit-oriented development, including a mix of retail, hospitality, office and residential, that will be integrated into the overall station and revitalize the western portion of downtown to an area where people can live, work and play,” Mr. Reininger said.

All Aboard Florida, however, hasn’t confirmed that it would pursue any of the downtown Miami station options or development proposals outlined in the environmental assessment submitted to the Federal Railroad Administration, which gave the assessment a ruling of no significant impact.

Miami-Dade and City of Miami officials told Miami Today that an application for station-related development hasn’t been filed.

Earlier this year, the county and the city entered into an agreement that cedes control of growth in the linear chunk of land to the county.

But a committee comprised of three manager-appointed and commission-approved Miami representatives – Commissioner Marc Sarnoff, Planning and Zoning Director Francisco Garcia and Zoning Administrator Irene Hegedus – and representatives from various Miami-Dade departments will give the City of Miami an extra layer of protection from unwanted development. If the city representatives oppose certain development, then the committee would send a negative recommendation to the county. County commissioners would need an at least 9-4 vote to overturn a negative recommendation.

County members of the committee include employees at the departments of Regulatory and Economic Resources; Public Works and Waste Management; and Parks, Recreation and Open Spaces.

Mr. Reininger of All Aboard Florida said construction on the downtown Miami station is expected to begin this year.

3 Responses to Railroad to take the high road