Advertisement
The Newspaper for the Future of Miami
Connect with us:
Front Page » Government » Miami barring door to door bars 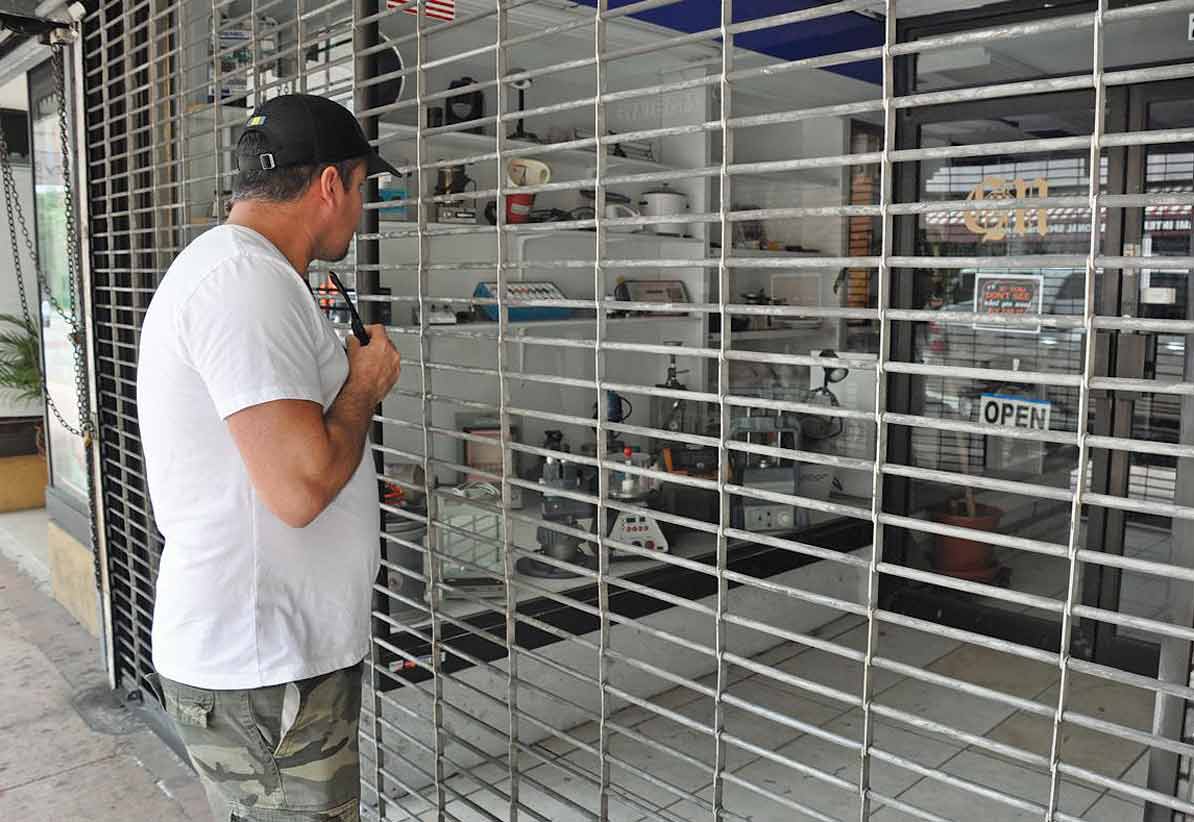 Commissioners last week approved the first reading of an ordinance to prohibit most security screens and non-decorative shutters on businesses in the Downtown Development District.

A final vote will come later.

Marc Sarnoff pushed for the change in a campaign to make downtown more welcoming and appealing. The Downtown Development Authority has a program to help pay for the changes, said Commissioner Sarnoff, who is chairman of the authority’s board.

“We will fund the program,” he said. “There is a strategy.”

The private sector needs to pay toward the changes too, he said.

The goal is to make downtown a “walk-able, friendly city” and encourage interesting window treatments, he said.

Proponents said security screens and shutters are uninviting, some extremely old and in bad condition, and they can be graffiti magnets.

Merchants who have resisted the change complained about the cost and exposure of their businesses to crime.

New buildings could no longer have permanent security screens and non-decorative shutters, said Mr. Sarnoff at the March 27 meeting. Older buildings with see-through screens and shutters will be “grandfathered in,” he said.

The amendment reads: “This provision shall not apply to properties with transparent security screens and shutters not in compliance with this article located in the Downtown Development District.”

The proposal says all properties with opaque security screens and shutters will have up to two years to comply. The amendment defines opaque as “not transparent or translucent and are impenetrable to light.”

Any building permit to remodel a building’s exterior or replace windows will require immediate compliance, the amendment reads.

The proposed change also states that once the security screens and shutters are removed, highly reflective surfaces, including reflective glass and mirrors, will be prohibited on the ground floor.

Improving how downtown looks will benefit everyone, said Commissioner Francis Suarez. He said he was happy to learn that affected business owners support the change.

“Our downtown should be like downtown Paris, or Rome,” he said, and it’s good to know the DDA [development authority] will be there to help businesses through the transition.

“It is financially burdensome,” he said.

Mr. Suarez said he’d recently spoken with a business owner who had opposed the change, citing primarily the cost, who now favors it. He wanted to make certain the monetary assistance was maintained and increased, said Mr. Suarez.

Development authority officials say the new rules wouldn’t change much for the authority, which for years has had a fund to help businesses remodel façades, including removal of security bars and shutters. For at least five years, the authority has financially assisted businesses to replace shutters with high-impact glass.

“Undoubtedly, the downtown needs a facelift,” said Commissioner Keon Hardemon. Mr. Sarnoff and the development authority have done a good job, he said.

But other places in the city also need changes, he said, and code enforcement needs to be evident throughout the city.

It’s not right to neglect other parts of the community, said Mr. Hardemon, who represents District 5.

“I want to ensure my community looks good, too,” he said.

As an example of spotty code enforcement, Mr. Hardemon cited recent occasions at the parking lot of City Hall where lights were out and he saw debris and trash on the ground. He said he thought to himself, “This can’t be City Hall.”

Mr. Suarez said the city gets the biggest bang for the buck with beautification. He commended Mr. Sarnoff for working with the Downtown Development Authority and business improvement district to harness funds to improve his district.

“It is a fantastic idea,” said Jose Goyanes, downtown business owner and DDA board member.

“We reached an agreement that is best for small businesses… and it’s the right thing to do,” he told the commission. Mr. Goyanes owns Metro Beauty Center, Churchill’s Barbershop and Tre Italian Bistro.

The development authority will help business owners pay for the changes, which could include interior shutters if they are see-through, Mr. Goyanes said.

Public safety is important downtown, he said, and this change will encourage shop owners to leave lights on at night, and late-night strollers can window shop.

Commissioner Frank Carollo asked that before the final vote the development authority report to commissioners how much money it has on hand for this program.

Commission Chair Wifredo “Willy” Gort applauded the efforts to make downtown “a center of focus … the place to be, the place to go.”

Coupled with planned improvements to Flagler Street, these are positive changes for downtown, he said.

One Response to Miami barring door to door bars