Advertisement
The Newspaper for the Future of Miami
Connect with us:
Front Page » Business & Finance » Contractors boost wages in boom 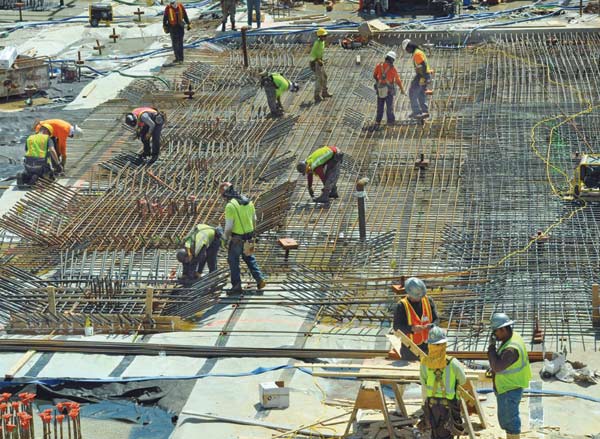 A continued construction boom in South Florida and Miami-Dade County has put a heightened demand on skilled construction workers that has only increased over the past eight months.

“For Florida construction, there have been several hundred thousand jobs, and we’ve started to see more activity in that sector,” said Sean Snaith, director of the University of Central Florida’s Institute for Economic Competitiveness at the 2014 Certified Commercial Investment Member (CCIM) Commercial Real Estate Outlook Conference this year.

“With the current work, the skilled labor workforce is definitely becoming a situation that all of the general contractors and subcontractors are keeping an eye on as a valid concern,” said Mr. Meltzer. The projects that tend to feel the brunt of the demand are mostly likely smaller ones, from which some of the larger projects in town are pulling away workers.

“There has been competition to attract the skilled labor force and to try to lure them to different companies and job sites,” Mr. Meltzer said.

For large projects like the Brickell City Centre, there was the expectation that the drain on the workforce would create an absence of workers. Thankfully, the City Centre project hasn’t created as much of a void as some had expected, Mr. Meltzer said.

More technical trades like mechanical, electrical, plumbing and fire protection – the MEPS – are typically in short supply. “Those are traditionally the more complicated, and the trades that typically require the most education and training,” Mr. Meltzer said. Others trades like painting, stuccos and masonry, which are still very critical trades to the industry but don’t require as much training and education, may be easier to find, he said.

Plaza Construction has long looked on a national level to attract top talent in subcontracting, and it’s possible that in response to the local drain on the skilled workforce others will do the same, Mr. Meltzer said.

“Both with general contractors and subcontractors, there’s only so many skilled, qualified, experienced people in our industry, and while we are attracting talent from out of town it’s hard to find,” he said.

Plaza Construction will actually turn down a project after weighing the costs and benefits if it seems impossible to find the right amount of skilled personal. “It’s a good problem to have. That should be our biggest problem, that we have to turn work away,” Mr. Meltzer said.

With the projects slated to begin, it’s hard to see an end to the drain on construction jobs.

“The shortage is continuing to become an issue, and it’s hard to say on a percentage basis or on a time basis when it’s going to reach critical mass,” Mr. Meltzer said. “It’s just a constant steady rise in sensitivity and it also depends [on] the projects that are slated on the horizon and how many of them happen.”