Advertisement
The Newspaper for the Future of Miami
Connect with us:
Front Page » Transportation » Unclogging Biscayne Boulevard 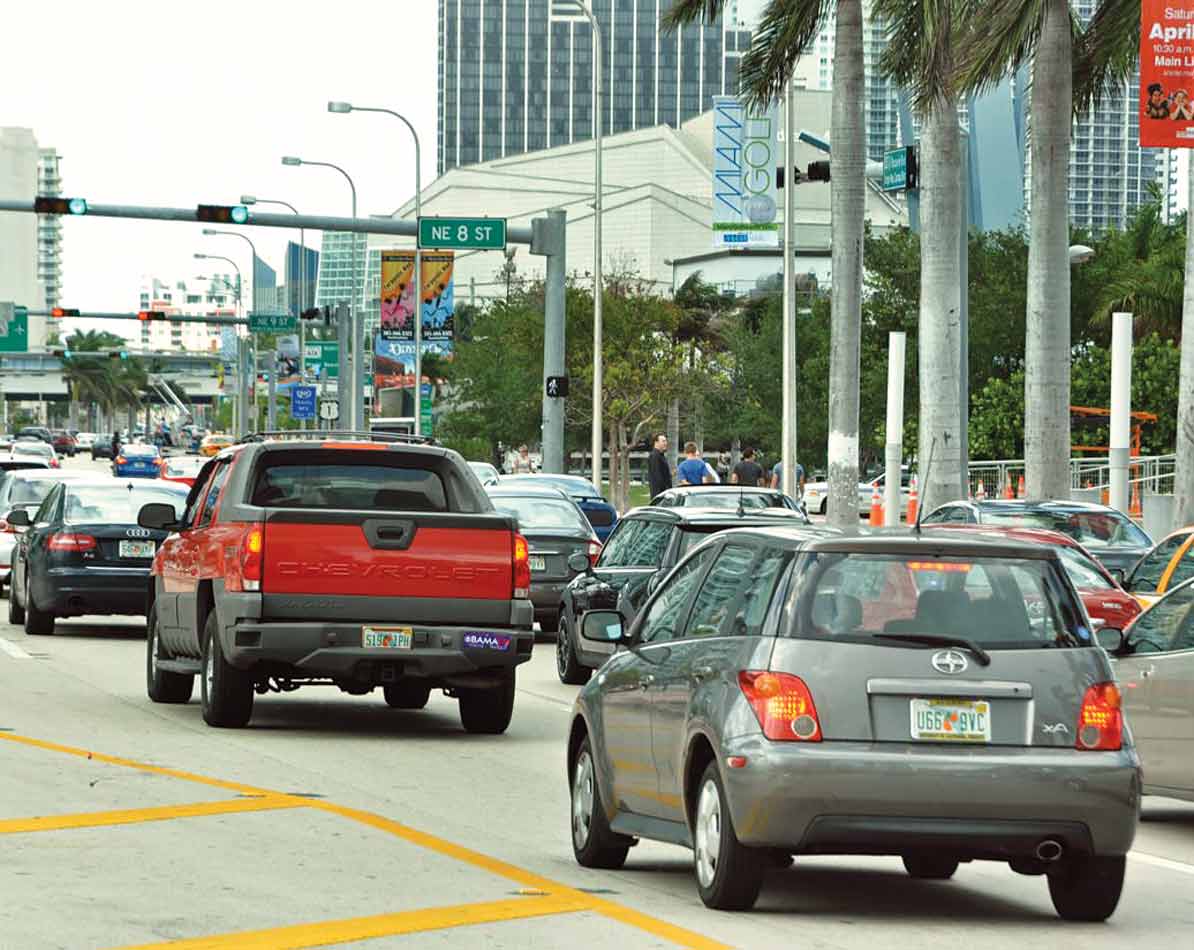 On any day, more than 45,000 vehicles make their way – often slowly – along Biscayne Boulevard downtown, a major artery through the heart of Miami.

When a popular event at the Adrienne Arsht Center for the Performing Arts clashes with a home Heat game, the centralized mash of metal turns portions of Biscayne Boulevard into a linear parking lot.

Local and state officials are grappling with the recurring gridlock and how it tries the patience of the motoring public, but building more roads isn’t feasible.

Instead, officials are taking a hard look at what they can do to better manage the traffic, and improve the lot of pedestrians too.

This week major downtown players sat down for a lunch meeting to talk about the issue, according to Alyce M. Robertson, executive director of the Miami Downtown Development Authority.

The development authority, city officials, Miami-Dade County officials, the Florida Department of Transportation and others gathered to talk about event planning in the city and how to better circulate people and vehicles.

“We are growing as a community, and, yes, we have traffic, but there are places in Miami that have worse traffic,” she said. Downtown benefits greatly from public transportation, namely the Metromover, and the county’s Metrorail system that feeds it, said Ms. Robertson.

“We do have the option of public transit… People park out farther and take transit into the core of the city,” she said.

“We host a lot of events in the downtown area. We are sort of experts on this… When we get really crowded, then everybody has traffic. To our advantage, we have the Metromover and Metrorail to relieve some of the traffic.”

The meeting Monday discussed events that draw huge crowds and how best to manage traffic and keep all involved communicating, she said.

“We are being proactive on this. We want to make sure that people understand we are not just sitting back and saying ‘everything is fine.’ We are looking to the future, to make sure people get around downtown and enjoy the experience,” Ms. Robertson said.

Other things can be done to deal with the traffic, she said.

“There are things, working with traffic engineers to implement some planning techniques… There are some things you can do even if you’re not building a new road,” Ms. Robertson said.

Communicating is one key, she said. It’s vital that Arsht Center staff have open lines of communication with arena staff as they work to manage traffic circulation on their respective inner drives and parking areas, she said. This is being done, she said.

Additionally, city police have been working to manage traffic from Heat games and “they do get people in and out pretty effectively,” she said.

Ms. Robertson said downtown’s population has nearly doubled in a decade and the number of events has grown as well. But there’s little chance of building roads to siphon off a parade of cars – there’s simply no room.

“There is no place to get right-of-way from… the oldest part of the city is here, in downtown. We can’t widen the roads because there’s no place to put it,” she said.

Instead, officials must focus on ways to better manage traffic, encourage more use of public transportation, and do what they can to “make the pedestrian experience more welcoming,” she said.

The development authority provides maps showing transportation routes and options. The map is available from its website at www.miamidda.com.

“All the venues and agencies – the [Florida Department of Transportation], the county, the city – we all need to sit down with transportation engineers… We have to take a look at this, and make it more efficient,” she said.

Maribel Lena, a public information officer with Florida Department of Transportation’s District Six office in Miami, said Biscayne Boulevard is a very busy roadway – it does a lot.

“When vehicles use Biscayne Boulevard during events or when there are multiple events occurring within the same time period, demand often exceeds capacity, resulting in congestion,” Ms. Lena said. That means thousands of vehicles on top of the more than 45,000 that typically use the boulevard.

Along with leaving for events earlier to avoid the gridlock, Ms. Lena promotes use of the city’s trolleys.

Currently, Miami runs five trolley routes in the downtown area that connect to varied destinations in the city. One route, the Biscayne route, has a northern limit of Northeast 39th Street. Due to construction in the area, the route has been temporarily realigned to Northeast 40th Street. The route extends south to Southeast 26th Road.

In addition, Miami-Dade Transit is working on the Biscayne Enhanced Bus (Northeast Corridor), which will run premium limited-stop transit along Biscayne Boulevard/US 1 from downtown Miami to Aventura Mall. This route services the Arsht Center and connects directly to Little Haiti, Miami Shores, North Miami and North Miami Beach, she said.

While the transportation department might not have new road projects in the chute to add capacity to Biscayne Boulevard, one current construction project might ease conditions north of downtown.

This project on Biscayne Boulevard at I-395 includes widening the roadway and bridges to provide three eastbound and three westbound travel lanes, new lighting and more.

Lanes are closed nights and weekends, with some single daytime lane closures on Biscayne during non-event times.