Advertisement
The Newspaper for the Future of Miami
Connect with us:
Front Page » Arts & Culture » New Cuban Museum work begins 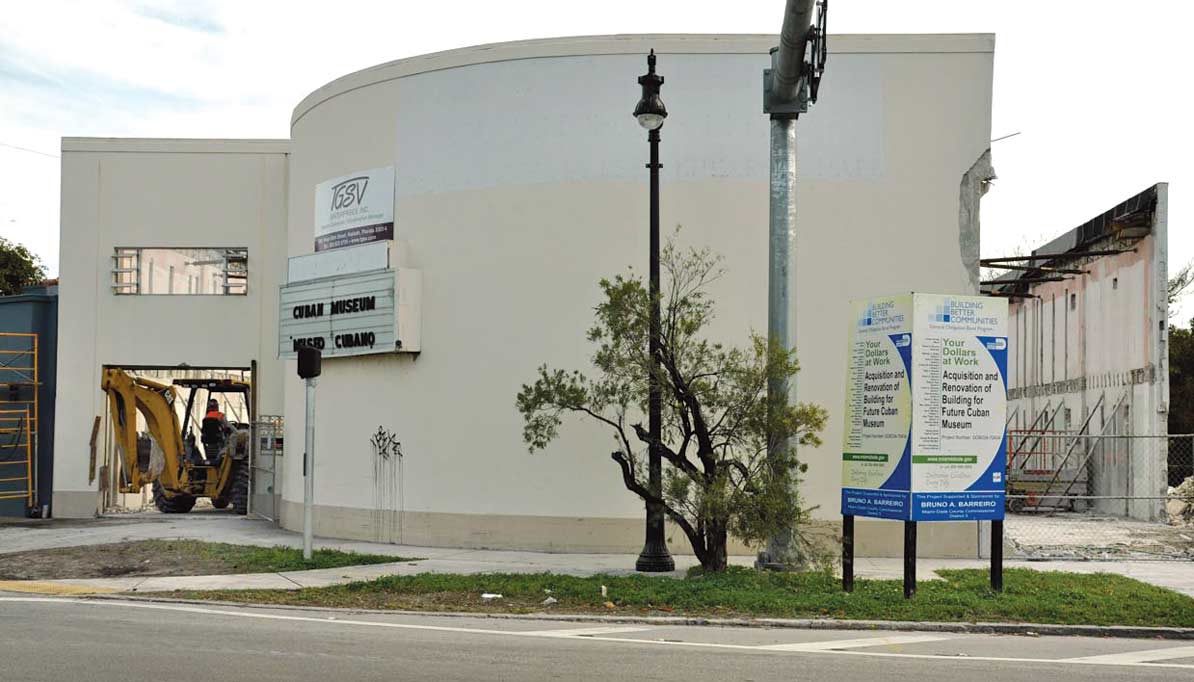 After a two-year construction hiatus, caused by Miami-Dade County’s temporary halt of parts of a bond program funding cultural infrastructure, the Cuban Museum is expected to open by early 2015, about three years later than planned.

The new home will be at 1200 Coral Way, near Cuban Memorial Boulevard.

The building’s purchase and reconstruction is funded through a $10 million bond administered by the Building Better Communities Bond Program, a voter-approved $2.9 billion countywide initiative to improve infrastructure and cultural venues.

But in 2011, Miami-Dade temporarily stopped funding several of those projects, including the Cuban Museum.

“When the economic situation at the time got really bad, the county put a lot of these kinds of projects on hold,” said Ileana Fuentes, the museum’s cultural consultant. “We weren’t able to do any construction or renovation on the building because we really didn’t have the funds from the county. It doesn’t mean that the General Obligations Bond was rescinded. It just means that the disbursement of it does not take place immediately. And now that the economy has improved a bit, there’s a green light on continuing.”

The Cuban Museum used $3 million of the $4.1 million disbursed in 2007 from the bond issue to purchase the Coral Way building, which is the former home of Florida Grand Opera’s Arturo di Filippi Center. The other $1.1 million was used for architectural and business planning as well as administrative costs, Ms. Fuentes said. The rest of the bond proceeds, $5.9 million, was disbursed in mid-2013.

The Cuban Museum has hired Hialeah-based construction-company TGSV Enterprises Inc. and Coral Gables-based Rodriguez and Quiroga Architects to do the job.

Construction at the nearly 15,000-square-foot facility is expected to be completed by October. The museum’s new home is to include a 5,340-square-foot gallery space, a movie and live plays theater on the second floor, a sculpture garden, a museum shop, and roof space for outdoor concerts, Ms. Fuentes said.

That’s quite an improvement from its current home at 1500 S Dixie Hwy., where the nonprofit Cuban Museum is staying rent-free in a Bank of America-owned building. The museum, overseen by a six-member citizens’ board, currently employs one administrator and features the donated work of five artists.

The Cuban Museum’s Coral Way operation plans to hire about a dozen more employees and include the work of nearly 250 artists, Ms. Fuentes said. Designated the Museum of the Cuban Diaspora, the Cuban Museum’s new collection is intended to reflect the story of Cubans as part of the émigré community.

“It will include anything and everything that related to the émigré community – the Mariel boatlift, [Operation] Pedro Pan. It will document some of these developments in the history of the exile community,” Ms. Fuentes said. “The exhibitions are never going to be separate from the mission of the museum, meaning that when we have a historical exhibition about the Mariel boatlift, there are going to be works of art done by Mariel artists. There will always be a connection.”

All artwork at the building, she said, will be donated by artists, their families and collectors, since the museum doesn’t have a purchasing fund.

Since the new Cuban Museum won’t be able to support an artifacts-preservation facility, Ms. Fuentes said she hopes trips will be organized to UM’s Cuban Heritage Collection.

The Cuban Museum has created an endowment with the Miami Foundation, and it hopes that within four years after moving to its building the endowment will grow to $10 million, Ms. Fuentes said.

Operations at its new home will be funded through state, federal, county and city grants; private and corporate donations; and admissions and membership fees, she said.

While Ms. Fuentes said she’s confident the museum will get enough grants to cover costs at the new location, obtaining grants has, so far, been slow.

“The only thing that is keeping us from proceeding faster is that we still don’t have a finished building,” she said. “If you don’t have an institution, it’s very difficult to convince people to give us $100,000 for a museum because the question they ask is, ‘Where’s the museum?’ But the minute we inaugurate the museum, the contributions, the donations and the grants will come in.”