Advertisement
The Newspaper for the Future of Miami
Connect with us:
Front Page » Education » Historic prep school plans remake 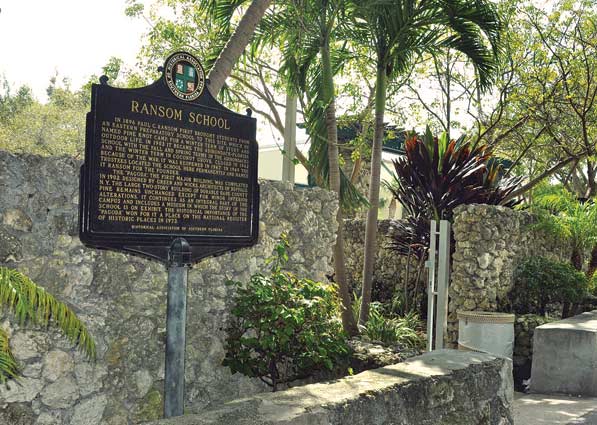 The board was leaning toward deferring the plan to await more information on traffic and parking, but school representatives pleaded with the board not to delay the project, which still must be reviewed by the planning and zoning board and the city commission.

Attorney Amy Huber offered details of the master plan, along with history about the school.

Founded in 1903, Ransom Everglades is a coeducational, college preparatory school for grades 6-12. The Middle School at 2045 S Bayshore Drive has 456 students. The Upper School at 3575 Main Highway is home to 608 students.

The master plan calls for the removal of seven buildings on the Upper School campus and the construction of three new buildings, Ms. Huber said.

“The reason is consolidation,” she said, with a focus on core academics.

Some of the older structures destined to meet the business end of a bulldozer have been around since the 1940s and ’50s.

Of the new structures planned, the school proposes to build a STEM building for the study of science, technology, engineering and mathematics.

“Ransom has always exceeded learning and teaching philosophies,” said Ms. Huber, noting Ransom would have one of the first STEM centers in the county.

The site plan includes a new drop-off and pick-up area for students and altering the way vehicles pass through the property, with a goal of removing pedestrian-vehicle conflicts.

Along with a new entry loop, parking at the Upper School will be consolidated as well, she said.

The master plan is designed to help preserve the long-established landscape in and around the campus, including lush and large tree canopies along Main Highway, and thick and old banyan trees, said Ms. Huber.

It is “critical” that the old cottage and pagoda on campus stay put as they are national historic landmarks, she said.

The master plan doesn’t aim at more students, she said. The changes are for the needs of the current student body at the Upper School, she said.

Board members asked about parking.

Ms. Huber said there are 268 parking spaces. Zoning rules require 197 spaces, and so, she said, they are “over-parked” by 70 spaces.

The plan includes reducing spaces to 210, she said, and if the school wants more in the future “we reserve the right.”

The master plan includes an area where additional parking could be created in an upper or lower parking facility, Ms. Huber said.

Gerald C. Marston, board member and architect, mentioned he lives south of the school on Main Highway and was most interested in what could be done about traffic congestion. He suggested rules for parents dropping off children, establishing a right-turn-only to enter and right-turn-only to exit at designated times on school days.

He acknowledged other schools along that stretch of road add to the problem.

“Main Highway is a mess,” he said.

Ellen Moceri, head of the school, said Ransom has a “no left turn” rule from 3 to 5 p.m. daily,  but different police officers handle the traffic differently.

Willy Bermello, board member and architect, complimented the overall plan as “beautifully presented” and “very nice” but said its potential weaknesses involved traffic and parking.

Mr. Bermello said the school would be increasing its square footage by nearly 50% in the plan yet it was decreasing parking spaces.

He said that could be a problem down the road. “Looks like you’re heading for a head-on crash,” Mr. Bermello said.

He also criticized the non-specific reference on the master plan for future parking.

“You say, ‘we might put up a parking garage.’ We need to know,” Mr. Bermello said.

He also questioned why the school would say it is “over-parked” by 70 spaces and plan to reduce spaces yet identify an area for potential future parking. “I want to see that reconciled,” he said.

Mr. Bermello asked several times for a traffic analysis. “I want to see that analysis,” he said.

The traffic consultant had been sidelined by food poisoning and wasn’t able to attend, Ms. Huber told the board.

Eventually, two letters from the consultant were passed out to board members.

Mr. Bermello complained the letters were not a formal report. He said the project should be deferred until the consultant could make a full presentation “so we fully understand.”

The parking plan would set aside seven spaces for visitors, 126 for faculty and staff and 77 for students, said Ms. Huber.

Ms. Huber and Ms. Moceri stressed that the project is increasing floor space but not the numbers of students. Ms. Moceri said they would be open to any suggestions to ease traffic, and later said, “I assure you, we are not increasing traffic.”

If you increase circulation by 60% inside the campus, then vehicles will be getting off Main Highway faster, she said.

In the end, the board approved the master plan subject to several conditions, including limiting parking spaces to 210, and making Ransom proffer suggestions to reduce the congestion on Main Highway and be willing to implement those suggestions.