Advertisement
The Newspaper for the Future of Miami
Connect with us:
Front Page » Real Estate » State’s tallest observation tower advances 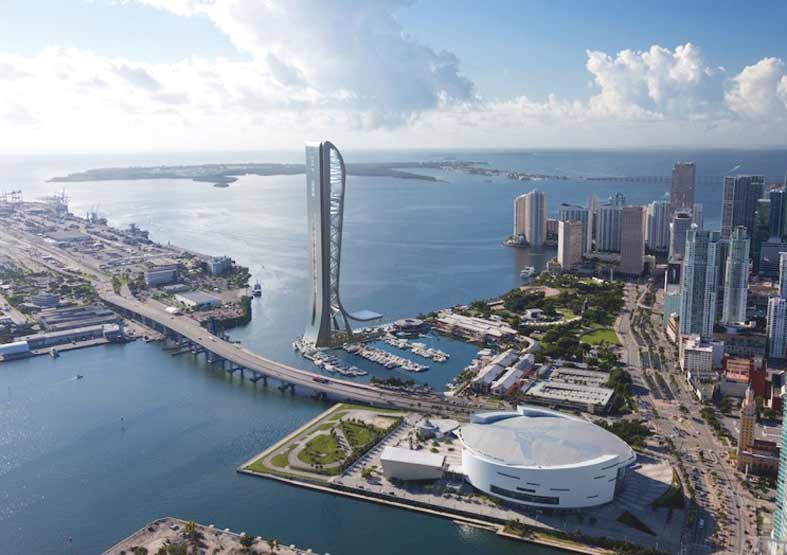 You cannot construct the tallest building in Florida without a complete and total commitment.

“I am spending seven days a week working on this. It’s exhilarating getting up in the morning,” said Jeff Berkowitz, the developer who intends to build a metropolitan tower in downtown Miami that is to be an iconic addition to the city’s skyline and a legacy for generations.

SkyRise Miami is to stretch 1,000 feet skyward and be home to a wide assortment of fun and adventure, from a nightclub to a tethered jump experience.

The planned giant glass and steel tower looks a bit like a capital “R,” as it slopes back toward the area of the Hard Rock Cafe. The tower is to be built on the land that today is the parking lot for Hard Rock.

Mr. Berkowitz plans to sublease about 2 acres from Bayside Marketplace, which leases that section of waterfront land from the City of Miami.

Mr. Berkowitz is turning to the federal EB-5 visa program to attract millions in foreign investment for more than half the cost of the ambitious venture.

SkyRise Miami may end up costing $430 million to build. Mr. Berkowitz is working to get $270 million from people wishing to take part in the immigrant investor program. The rest of the money is coming from other investors, Mr. Berkowitz said, including a “significant” amount of his own money.

Big enough to cast a shadow on nearby American Airlines Arena, SkyRise Miami will be quite the undertaking.

But Mr. Berkowitz has been busy. He has already gained the necessary approvals on the height of the tower from the Federal Aviation Administration.

Zoning has also been completed for the huge project.

“We will be presenting the project to the city commission for certain remaining approvals,” Mr. Berkowitz said recently.

“We do not anticipate an issue in receiving phased permits, which will allow the foundation work to commence,” he added.

Mr. Berkowitz plans preparatory work on the site to begin in April, and is planning on a May groundbreaking.

“Interest is very high,” he said. “We view SkyRise as the prettiest girl in the dance.

“We are projecting 3.2 million visitors a year,” he said.

“From an economic standpoint, the benefits to the community are overwhelming. We expect to become one of Miami-Dade County’s top 20 private employers,” Mr. Berkowitz said.

A study of the potential impact of SkyRise on the area, conducted by The Washington Economic Group Inc., shows an estimated 6,782 jobs are likely to be created during the development of the project.

“SkyRise Miami’s presence will enhance the state and Miami-Dade County’s global brand as a top entertainment and leisure destination for both domestic and international visitors, creating thousands of jobs in a variety of industries,” the study says.

Once completed, SkyRise Miami is expected to create about 16,000 “annual employment positions” in Miami-Dade County, the study says.

The grand plan for the tower is to see it include:

νSkyRise “Sky High” Club, perched almost 1,000 feet above the skyline as “one of the most exclusive private clubs in the world,” according to its stylish website.

νSkyRise Ballroom. “Every ‘it’ event from South Florida and the Americas will have to be planned here.”

νSkyRise Drop can be described as base-jumping using a sophisticated bungee-like safety system whereby jumpers are attached to a high-speed controlled descent wire.

νSkyRise Flying Theater, a motion-based simulator that explains the thrill of flight, similar to Soaring at Epcot Center in Walt Disney World.

νSkyPlunge Miami: like parachuting out of an airplane, riders will experience the thrill of free fall followed by the jolt of extremely rapid deceleration, project promotions say.

Mr. Berkowitz points to the drawing power of other towers around the globe, including the Skytree Tower in Tokyo, which opened a couple of years ago. Skytree is part of a 9-acre development encompassing a seven-story shopping center and aquarium. The estimated draw was 5.4 million visitors, but actual numbers reached 6.4 million annual tower visitors.

Famous observation towers world-wide have been and continue to be popular, Mr. Berkowitz noted. The world’s 41 towers in 21 countries on five continents attract 55 million visitors a year.

SkyRise Miami already has its fans, garnering local support from major players in the community.

“Like the Eiffel Tower and the St. Louis Gateway Arch, SkyRise Miami will be a strong, recognizable symbol and another element to solidify Greater Miami’s leadership position among the top global destinations,” said Barry Johnson, president and CEO of Greater Miami Chamber of Commerce.

Alyce M. Robinson, executive director of the Downtown Development Authority, said the tower is consistent with and furthers the 2025 Downtown Miami Master Plan’s call for an iconic waterfront element along Biscayne Bay.

Larry Williams, president and CEO of the Beacon Council, said: “World-class cities are often identified with their iconic architecture. Miami will take its place on the world’s stage with this 1,000-foot-tall skyline and provide great economic opportunities for our community.”

Mr. Berkowitz said those involved in the project recognize the work as genuinely unique.

“It’s a legacy project,” he said. “Everyone involved will be leaving behind a legacy for literally many generations to come.”