Advertisement
The Newspaper for the Future of Miami
Connect with us:
Front Page » Government » Miami targets lone wall mural to go 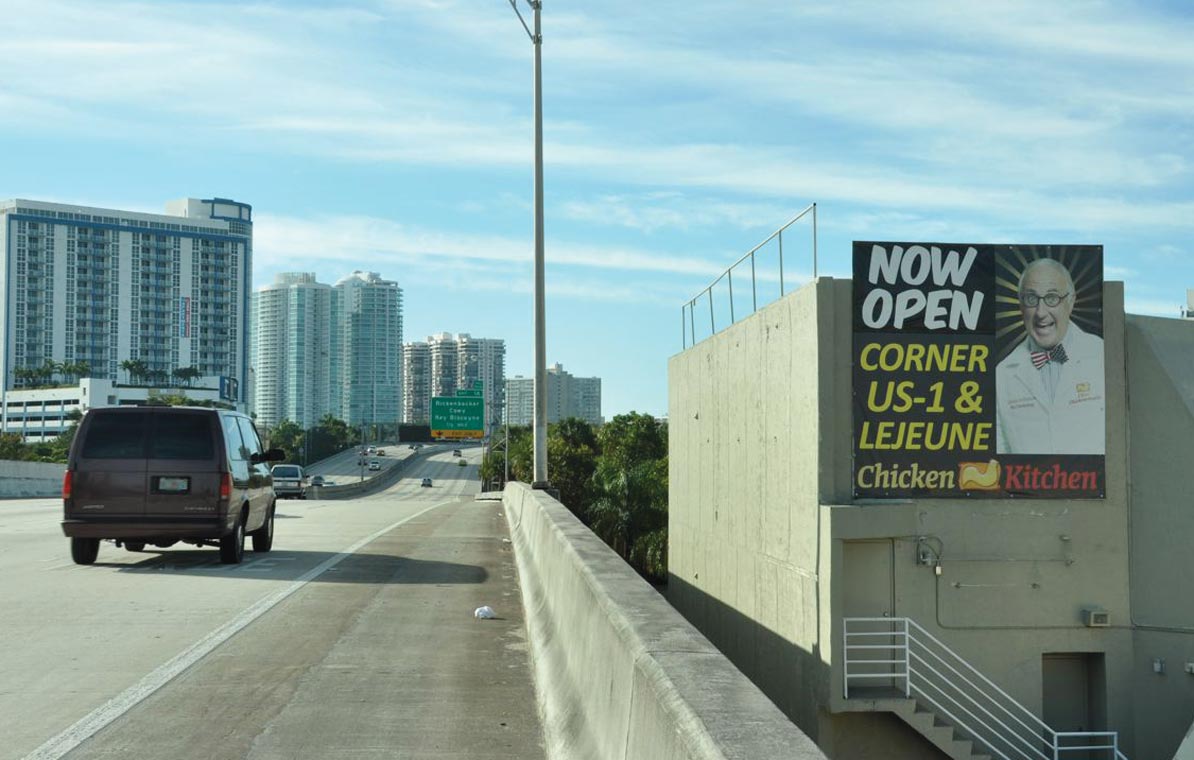 Miami Commissioner Frank Carollo is convinced wall mural laws in the city are being selectively enforced. This belief played a role in a debate last week about an illegal wall mural in the shadow of I-95 and led to a testy exchange between Mr. Carollo and Commissioner Marc Sarnoff.

“My issue is: There is selective enforcement,” Mr. Carollo said.

At the end of lengthy discussion on the large sign, the commission voted 4-1 to take legal action to remove the mural. Mr. Carollo voted no.

The wall mural in question is a large sign on the back of a commercial building at 299 SW 17th Road, right beside the freeway. It depicts a smiling man in a white chef’s jacket and a stars-and-stripes bowtie and says: “Now Open Corner US-1 & LeJeune Chicken Kitchen.” The mural formerly advertised a local pizzeria and sub shop.

Mr. Carollo asked a code enforcement representative how the city decides if a mural is illegal.

A code enforcement officer is sent out when complaints are made.

Mr. Carollo asked several times if the mural was the only illegal one in the city.

“It is the only one we are aware of,” said the official, adding that all means have been exhausted to have the mural removed short of going to court against the property owner.

Mr. Carollo said enforcement is not proactive, it’s reactive, and the city has been “lax” in enforcement the past four years.

Mr. Sarnoff spoke of efforts in recent years to address large murals, noting at one time they numbered near 100. Through a dedicated mural program, he said, the city ended up with about 25 murals around I-95.

Sometimes enforcement of the mural rules isn’t easy, according to Mr. Sarnoff. The one at 299 SW 17th Road has survived many enforcement efforts to remove it, he said.

Mr. Sarnoff mentioned a situation involving another advertising sign placed on a building under construction during Art Basel last month. “We did everything in our power” to get the illegal sign removed for more than a month, he said, but it remained displayed with the building owner absorbing a fine of $1,500 day.

As it turned out, the fine was a pittance compared to what the building owner was paid to host the illegal sign, according to commission Chairman Wifredo “Willy” Gort. It was just the cost of doing business, he said.

Mr. Sarnoff mentioned recent enforcement action against illegal murals. “There were six murals I called [code enforcement] on… they were able to bring down six,” he said. “This is the seventh,” he said of the 17th Road mural.

“I don’t want to see selective enforcement,” said Mr. Carollo. “I want to see a comprehensive resolution of all [illegal] murals.”

Mr. Carollo reiterated there are other existing illegal signs, and he asked for a complete list of murals.

“There are more… I want to have that list,” said Mr. Carollo.

He argued at length to defer action on the 17th Road mural to the next commission meeting in February, affording code enforcement staff time to list illegal murals.

Other commissioners supported going after other illegal signs, but said this one had to be dealt with.

“We can enforce until we’re blue in the face. To bridge the gap we need better enforcement and compliance,” he said. The city must take legal action against illegal murals and signs, including fines and arrest if necessary, to show that there will be consequences for illegal signs, he said.

“I believe there are more illegal murals out there,” Mr. Suarez said.

Mr. Carollo continued to push for postponing the case two weeks and having the code enforcement office list all murals and billboards and the status of any review and enforcement action on them.

“I listen better than you think I do,” Mr. Carollo responded, raising his voice.

“I want to go citywide with this… Other areas are getting away with [illegal signs],” Mr. Carollo said.

Mr. Suarez, in a bid to calm discussion and resolve the item, suggested “Why not enforce this one… and we can keep looking for the rest?”

“What would it hurt to wait until the next meeting?” Mr. Carollo persisted.

“It’s been on the agenda for 18 months,” Mr. Sarnoff responded.

“We’re missing the bigger picture… It’s happening citywide and we’re not going after them,” said a frustrated Mr. Carollo.

Mr. Sarnoff moved approval of legal action against the 17th Road mural along with a commission statement that it would “take all action necessary” against illegal murals, billboards and signs. The motion requires the code enforcement office to keep an updated list of signs and the status of enforcement and report on that list bi-monthly to the commission.

Mr. Suarez said he liked the idea of a list discussed by Mr. Carollo and Mr. Sarnoff, saying it can be an “accountability tool” as the city wrestles to control large signs.

After his “no” vote on the mural, Mr. Carollo said he only disagreed with the “timing,” believing the matter could have waited two weeks.

One Response to Miami targets lone wall mural to go