Advertisement
The Newspaper for the Future of Miami
Connect with us:
Front Page » Communities » City OKs decorative wall as sound buffer 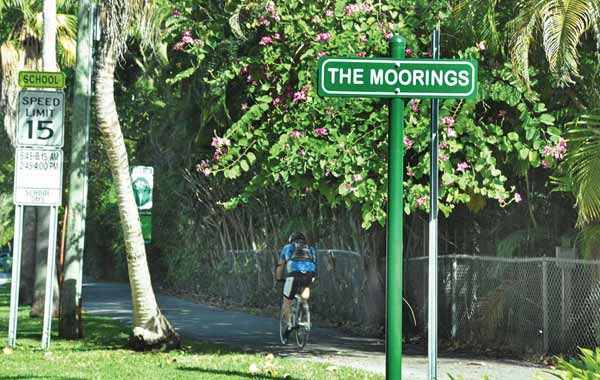 First it was a whitefly invasion, then workers for the county. Enemies, both natural and manmade, have worked to decimate much of the thick and lush foliage near The Moorings that for years had provided a sound and visual buffer for the long-established residential area in Coconut Grove.

The latest attack came when the county widened the bike path next door and cut back the greenery, according to home-owners.

Resident Larry Tornek said The Moorings’ area has been witness to tremendous growth in traffic and noise over the years. To filter out the bustle of congestion, the homeowners association had a chain-link fence installed with a ficus hedge, which served to cut the noise level.

“When the county widened the bike path they destroyed our hedge… no sound barrier remains,” Mr. Tornek told the Miami City Commission on Dec. 12.

To compensate for the lost barrier, the association board for The Moorings gained commission approval to construct a decorative wall along its portion of Main Highway in Coconut Grove.

The new coral rock wall will be consistent with the character of other walls in the area, Mr. Tornek said. The wall will be no higher than 6 feet, city officials said, and no trees will be removed to install the wall.

The Highway Section of the Public Works Department recommended approval of the wall. Approval was needed because the existing fence is in the public right-of-way.