Advertisement
The Newspaper for the Future of Miami
Connect with us:
Front Page » Government » State incentives reclaiming city land 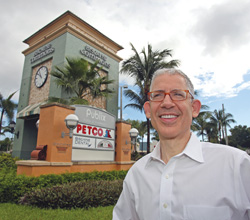 Garden apartments are among the developments sprouting on former polluted sites, thanks to a growing brownfield movement backed by state incentives.

Cleanup is expensive, but supporters say those willing to undertake the work of transforming once-contaminated land are gaining ready-made competitive advantages.

“It’s a major trend we’re seeing,” said attorney Michael Goldstein. “Developers are willingly accepting the risks because [brownfields] are so strategically located and the incentives are undeniable.”

A brownfield is a property that has been “abandoned or underused due to a real or perceived environmental problem.” But developers have hired the Goldstein Environmental Law Firm for 10 brownfield projects in Miami-Dade and 14 across Florida, Mr. Goldstein said.

In the past year alone eight affordable housing developers hired the firm to help secure designations for their projects. And while its clients have included residential developers, such as the Pinnacle Housing Group and The Related Group, retailers are a playing a major role in the brownfield movement, with Sam’s Club, BJ’s Wholesale Club, IKEA and Publix Super Markets Inc. also among his clients, Mr. Goldstein said.

“Retail is big in brownfields…,” he said. “For years, developers and end users avoided these sites because of the cost and time associated with cleanup.”

But that’s no longer the case, thanks to “powerful incentives to mitigate the cost of cleanup.” For instance, the state offers a cleanup tax credit against Florida’s corporate income tax that can generate up to $500,000 a year. A second incentive offers a tax refund for job creation on brownfield sites; a third provides a 100% sales tax refund for affordable housing projects on brownfield sites; and other provisions provide a liability protection incentive.

“This is why we have so many clients who are pursuing affordable housing sites,” Mr. Goldstein said.

And they’re not alone, according to information from state agencies.

Last year investors spent more than $823.5 million in private capital investment on brownfield areas. And such developments created 17,182 projected direct and indirect jobs in 2012, according to Enterprise Florida and the state’s Department of Economic Opportunity.

“We’ve experienced a huge uptick in…clients who are engaging us to help them find sites or come to us with sites that have environmental challenges,” Mr. Goldstein said.

But once they find a brownfield, developers must be ready to invest in its cleanup.

For a gas station, the average cost is $500,000 to $1 million for underground storage tanks but could reach up to $5 million on rarer cases of sites that also served as service and repair stations that used solvents that migrated great distances.

Rehabilitating former dry cleaning sites typically costs $1 million to $2 million because of lingering and hard-to-detect chemicals that float on water and could easily cause expenses to multiply, Mr. Goldstein said.

But the payoff lies in the government incentives, plus the prime location these sites often occupy, and ready access to infrastructure, workforce and customer base.

“Plus, there’s tremendous competition for land,” Mr. Goldstein said. “This gives a developer the advantage over his competition, who may not be willing to work through these issues.”